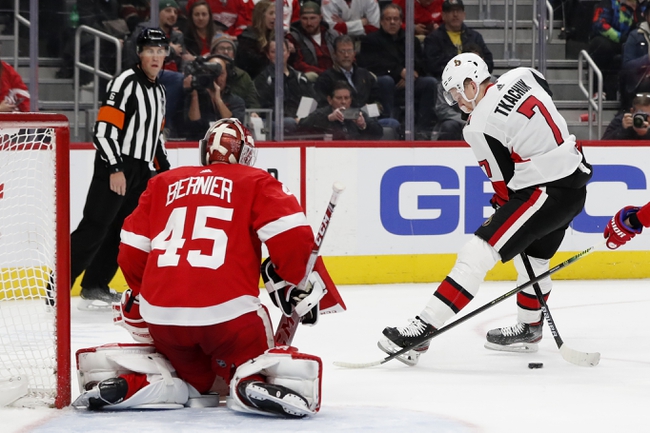 The Ottawa Senators head to Detroit, MI on Friday for a game against the Red Wings in a matchup of the two teams at the bottom of the Atlantic Division.  In their last game the Senators were defeated by the Washington Capitals by the score of 6-1.  The Senators received their lone goal at 5:40 of the 1st period from Artem Anisimov with an assist from Rudolfs Balcers.  Both of the Senators goalies saw action in the game as Craig Anderson allowed 5 goals on 30 shots, while Marcus Hogberg allowed 1 goals on 11 shots.

With the loss against Washington, Ottawa is 16-22-5, for a total of 37 points which puts them in 7th place in the Atlantic Division.  Ottawa has been led in points and goals by Anthony Duclair, who has 32 points and 21 goals on the season. Thomas Chabot leads the Senators in assists with 21, with 7 coming while on the power play.  Goalie Marcus Hogberg has a record of 1-2-2 and currently has a goals against average of 3.42.  Craig Anderson has a record of 6-11-1 with a goals against average of 3.27.  Ottawa comes into Friday’s game 5 players listed on their injury report as Dylan DeMelo and Ron Hainsey are on injured reserve, Anthony Duclair is day to day, while Nikita Zaitsev and Nick Paul are listed as out.

The Detroit Red Wings welcome the Ottawa Senators to town on Friday after winning their last game against the Montreal Canadiens by the score of 4-3.  The Red Wings received goals from Filip Zadina, Robby Fabbri and 2 goals from Frans Nielsen on their way to the win.  Detroit goalie Jonathan Bernier recorded the win in net for Detroit as he made saves on 23 of 26 Detroit shots on the night.

On the year the Red Wings are 11-30-3 and are in 8th place in the Atlantic Division.  The Red Wings are led in points and goals by Tyler Bertuzzi who has 32 points this season to go along with 15 goals, including 2 while on the power play.  The Red Wings are led in assists by Dylan Larkin who has tallied 18 on the year with 4 coming while on the power play.  Detroit goalie Jonathan Bernier is 9-12-2 with 1 shutout and a 3.04 goals against average this season.  Jimmy Howard is 2-14-1 with a goals against average of 4.04 so far this year.  Detroit enters Friday’s game with 3 players listed on their injury report as Trevor Daley and Frans Nielsen are listed as day to day while Andreas Athanasiou is out.