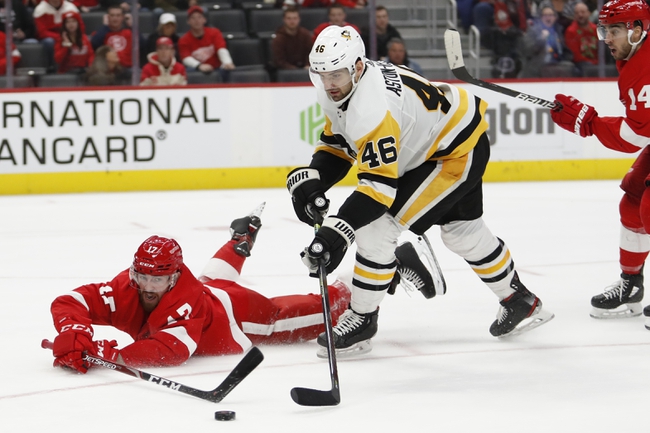 The Pittsburgh Penguins travel to Detroit, MI on Friday for a game against the Red Wings, but first must play the Boston Bruins on Thursday night.  In their last game, the Penguins defeated the Minnesota Wild by the score of 7-3.  Pittsburgh received goals from Jared McCann, Bryan Rust, Sidney Crosby, Dominik Simon, Alex Galchenyuk and 2 goals from Evgeni Malkin on their way to the win.  Pittsburgh goalie Tristian Jarry recorded the win in net, making saves on 26 of 29 Minnesota shots on the night.

On the year, the Penguins are 29-12-5 and are currently in 2nd place in the Metropolitan Division. Evgeni Malkin leads the Penguins in points and assists on the year with 47 points and 32 assists.  Jake Guentzel leads Pittsburgh in goals with 20.  Pittsburgh has received strong goaltending on the season from both Matt Murray and back up, Tristian Jarry.  On the year, Murray is 13-6-4 with 1 shutout and a 2.91 goals against average, while Jarry is 16-6-1 with 3 shutouts and a 2.12 goals against average. The Penguins enter Friday’s game with just 1 player listed on their injury report as Jake Guentzel is listed as out.

The Detroit Red Wings welcome the Pittsburgh Penguins to town on Friday after losing their last game against the New York Islanders by the score of 8-2.  The Red Wings received goals from Filip Hronek and Givani Smith but it wasn’t enough to pull out a win.  Both Detroit goalies saw action in the game as Calvin Pickard allowed 5 goals on 19 shots while Jimmy Howard allowed 3 goals on 7 shots.

On the year the Red Wings are 12-32-3 and are in 8th place in the Atlantic Division.  The Red Wings are led in points and goals by Tyler Bertuzzi who has 34 points this season to go along with 16 goals, including 2 while on the power play.  The Red Wings are led in assists by Dylan Larkin who has tallied 20 on the year with 4 coming while on the power play.  Detroit goalie Calvin Pickard is 0-2-0 with a 5.46 goals against average this season.  Jimmy Howard is 2-16-1 with a goals against average of 4.26 so far this year.  Detroit enters Friday’s game with 3 players listed on their injury report as Trevor Daley is listed as day to day while Andreas Athanasiou and Jonathan Bernier are on injured reserve.