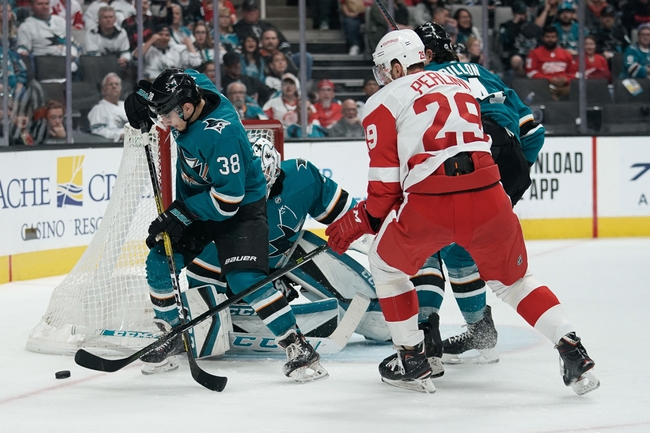 The San Jose Sharks head to Detroit, Michigan on Tuesday for a game against the Red Wings in a matchup of teams from the Eastern and Western Conference.  In their last game, the Sharks were victorious, beating the Philadelphia Flyers by the score of 6-1.  The Sharks received goals from Mario Ferraro, Joel Kellman, Patrick Marleau and 3 goals from Timo Meier on their way to the win.  Martin Jones recorded the win in net for the Sharks as he made saves on 26 of 27 Flyers shots on the night.

After the win against Philadelphia, San Jose is now 17-20-3 on the season and are currently in 7th place in the Pacific Division.  Logan Couture has been the leader offensively for the Sharks all season as he leads the team in points with 33.  Tomas Hertl leads San Jose in goals with 14, with 2 coming on the power play.  San Jose is led in assists by Erik Karlsson who has recorded 24 on the season.  Goalie Martin Jones has a record of 13-14-1 with a goals against average of 3.21.  The Sharks other goalie is Aaron Dell who has a record of 4-6-2 with a goals against average of 3.15.  San Jose comes into Tuesday’s game with 1 player listed on their injury report as Melker Karlsson is listed as day to day.

The Detroit Red Wings welcome the San Jose Sharks to town on Tuesday after losing their last game against the Tampa Bay Lightning by the score of 2-1.  The Red Wings received their lone goal from Robby Fabbri at 17:54 of the second period with assists from Filip Hronek and Andreas Athanasiou.  Detroit goalie Jonathan Bernier took the loss in net for Detroit as he allowed 2 goals on 37 of Tampa Bay’s shots on the night.

On the year the Red Wings are 9-28-3 and are in 8th place in the Atlantic Division.  The Red Wings are led in points and assists by Tyler Bertuzzi who has 30 points this season to go along with 16 assists.  The Red Wings are also led in goals by Bertuzzi who has scored 14 on the year with 2 coming while on the power play.  Detroit goalie Jonathan Bernier is 7-11-2 with a 3.19 goals against average this season.  Jimmy Howard is 2-13-1 with a goals against average of 4.11 so far this year.  Detroit enters Tuesday’s game with 3 players listed on their injury report as Anthony Mantha is on injured reserve, Jonathan Bernier is day to day and Valtteri Filppula is listed as out.

The San Jose Sharks have scored an average of 2.68 goals per game this year while allowing 3.40 goals per game.  The Detroit Red Wings have scored 2.18 goals per game this season while allowing 3.90 goals per game. The Sharks are 1-4 in their last 5 games while the Red Wings are 0-5 and have lost 6 games in a row.  The Sharks won the first meeting of the season between these two teams by the score of 4-3 in a shootout in a game played in San Jose.  Coming into this game, neither team is lighting the world on fire but the total has gone over in 4 of the last 6 games between these two teams.  I am going to go with the Sharks in this one as Detroit has really struggled all year in every aspect of their game.  Also, the Sharks are 2-1 in their last 3 games against the Red Wings and have won by the average score of 3.67-3.00.  San Jose wins this one 4-2.