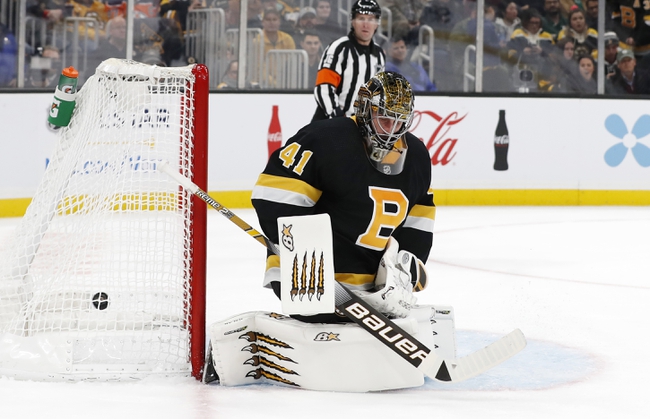 The Boston Bruins and the Edmonton Oilers meet in NHL action from Rogers Place on Wednesday night.

The Boston Bruins will look to build on a 3-1 road win over the New York Rangers in their last outing, pushing their winning streak to three games. Charlie McAvoy opened the scoring with the lone goal of the opening period before Charlie Coyle doubled the lead with the lone goal of the 2nd period coming short-handed. New York cut the deficit to 2-1 just before the midway point of the 3rd period, but ultimately it wouldn’t be enough as Patrice Bergeron iced the win with an empty-netter in the last minute of the game. Jaroslav Halak got the win to improve to 15-6-6 on the year after stopping 25 of 26 shots faced in the winning effort.

The Edmonton Oilers will look to build on back-to-back wins of their own after a 4-3 overtime win over the Carolina Hurricanes last time out. Carolina opened the scoring just :12 into the game before Leon Draisaitl tied the game at one for the Oilers just over six minutes later. The Hurricanes would re-take the lead just after the five minute mark of the 2nd period but Kailer Yamamoto and Josh Archibald would help Edmonton tie the game and take the lead in a span of :28 later in the 2nd period. The Hurricanes would trail for much of the 3rd but would tie the game at three with just over five minutes to go. Neither side would produce the game winning goal in regulation, so it was off to OT where the aforementioned Archibald potted the game winner for Edmonton with just over a minute to go in the extra frame. Mike Smith got the win to improve to 16-10-4 on the year after stopping 28 of 31 shots faced in the winning effort.

The plus money with the Oilers is intriguing as Boston hasn’t fared too well against the Oilers over the years, especially in Edmonton. However, Boston is rolling along right now, back on another one of their patented hot streaks, and while the Oilers have picked up wins here and there, let’s not forget that the Oilers are still missing Connor McDavid, a player who would be huge in a key matchup like this. Boston is balanced and healthy, and I think the Bruins can go into Edmonton and grind out a win here. I’ll side with Boston in regulation to get the price down a bit.