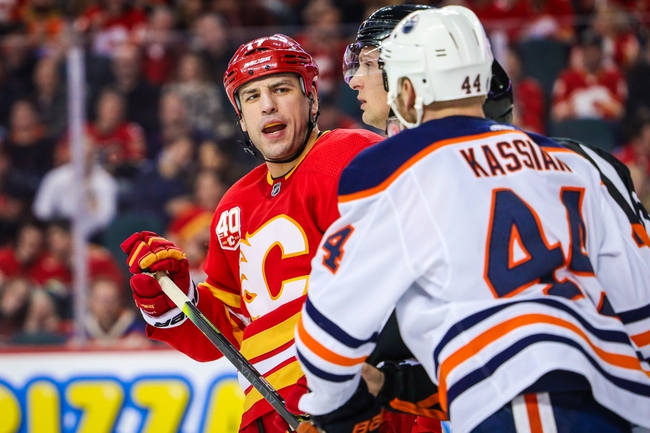 The Calgary Flames travel to Edmonton, Alberta on Wednesday for a game against the Oilers but first must play the St. Louis Blues on Tuesday night.  In their last game, the Flames were defeated by the Ottawa Senators by the score of 5-2.  The Flames received goals from Mark Jankowski and Noah Hanifin but it wasn’t enough to come out of the game with a win as the Flames were never truly in it.  Flames goalie David Rittich recorded the loss in net for the Flames as he allowed 4 goals on 20 Senators shots on the night.

After the loss against the Senators, the Flames are 26-19-5 and are currently in 3rd place in the Pacific Division. The Flames offense is led in points by Matthew Tkachuk who has tallied 38 points so far on the season.  Johnny Gaudreau leads the Flames in assists on the year with 25, with 9 coming on the power play.  Elias Lindholm leads the Flames in goals on the year with 20, with 7 coming while on the power play.  Calgary goalie David Rittich is 19-12-5 on the year with 2 shutouts and a 2.77 goals against average.  Backup goalie Cam Talbot is 7-7-0 so far this season with a goals against average of 2.54.  The Flames come into Wednesday’s game with a clean bill of health as they do not have anyone listed on their injury report.

The Edmonton Oilers welcome the Calgary Flames to town on Wednesday after winning their last game against the Arizona Coyotes by the score of 7-3. The Oilers received 2 goals from Connor McDavid to go along with goals from Josh Archibald, Sam Gagner, Kailer Yamamoto, Joakim Nygard and Riley Sheahan on their way to the win.  Edmonton goalie Mike Smith recorded the win in net for the Oilers as he made saves on 27 of the 30 shots he faced against Arizona.

After the win against Arizona, Edmonton is now 26-18-5 on the season and is currently in 2nd place in the Pacific Division.  The Edmonton offense runs through Connor McDavid who leads the Oilers in points with 76 and goals with 27 on the season.  McDavid also leads the Oilers in assists this year with 49.  Edmonton’s goalies have been decent overall so far on the year with Mike Smith recording a record of 12-9-3, with 1 shutout and goals against average of 2.96.  Mikko Koskinen has a record of 14-9-2 with 1 shutout and a goals against average of 2.90. Edmonton enters Wednesday’s game with a clean bill of health as they do not have anyone listed on their injury report.