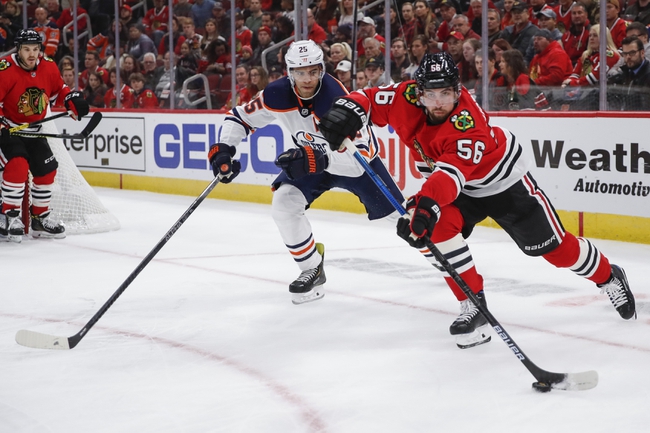 With the loss against Winnipeg, Chicago is now 25-22-8 on the season and is currently in 7th place in the Central Division. For Chicago's offensive totals on the season look no further than right winger Patrick Kane who continues to add to what has been a great career with the Blackhawks. Kane leads the team with 67 points, goals with 25 and assists with 42.  Goalie Corey Crawford is currently holding a record of 10-14-3 with 1 shutout and a goals against average of 2.92.  Meanwhile, Chicago’s other goalie Robin Lehner is 15-8-5 on the season with a goals against average of 2.83.  Chicago enters Tuesday’s game with 1 player listed on their injury report as Adam Boqvist is listed as day to day.

The Edmonton Oilers welcome the Chicago Blackhawks to town on Tuesday after winning their last game against the Nashville Predators by the score of 3-2. The Oilers received 2 goals from Leon Draisaitl to go along with a goal from Alex Chiasson on their way to the win.  Edmonton goalie Mike Smith recorded the win in net for the Oilers as he made saves on 27 of the 29 shots he faced against Nashville.

After the win against Nashville, Edmonton is now 29-20-6 on the season and is currently in 2nd place in the Pacific Division.  The Edmonton offense runs through Leon Draisaitl who leads the Oilers in points with 85 and assists with 54 on the season.  Draisaitl also leads the Oilers in goals this year with 31.  Edmonton’s goalies have been decent overall so far on the year with Mike Smith recording a record of 14-9-4, with 1 shutout and goals against average of 2.96.  Mikko Koskinen has a record of 15-11-2 with 1 shutout and a goals against average of 2.91. Edmonton enters Tuesday’s game with 3 players listed on their injury report as Connor McDavid and James Neal are day to day while Joakim Nygard is on injured reserve.

The Chicago Blackhawks have scored an average of 2.93 goals per game this season while allowing 3.04 goals per game.  The Edmonton Oilers have scored 3.17 goals per game on the year while allowing 3.13 goals per game.  In their last 5 games, the Blackhawks are 1-4 and have lost 3 games in a row while the Oilers are 3-2.  The Blackhawks won the first meeting of the season between these two teams by the score of 3-1 in a game played in Chicago.  The total has gone over in 7 of Chicago's last 9 games when playing on the road against Edmonton.  Edmonton is 5-2 in their last 7 games at home.  I am going with the Oilers in this one.  Edmonton wins 4-2.