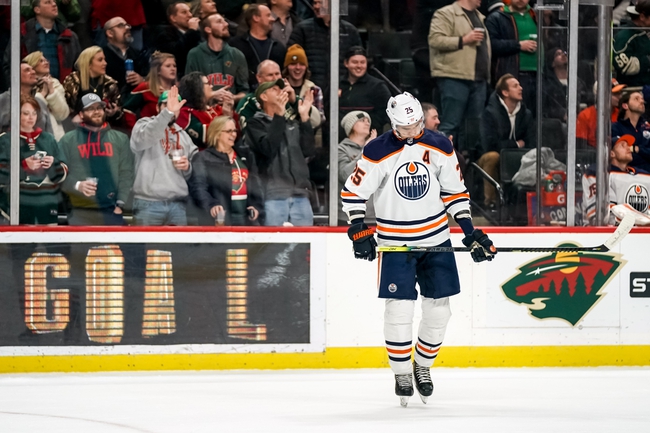 The Minnesota Wild and the Edmonton Oilers meet in NHL action from Rogers Place on Friday night.

The Minnesota Wild will try to build on a 4-3 shootout win over the Vancouver Canucks in their last outing. Kevin Fiala opened the scoring just over a minute into the game and the Wild would hold that lead going into the 2nd period where Vancouver would tie the game at one within the first two minutes of the 2nd period. Luke Kunin restored Minnesota’s lead later in the 2nd period and the Wild carried the lead into the 3rd, where Vancouver struck twice within the first five minutes of the period to take a 3-2 lead. Alex Galchenyuk tied the game at three with less than five minutes to go, eventually forcing OT. The extra period solved nothing, so it was off to the shootout where both sides had two goals after the first three shooters but Alex Galchenyuk would be the difference as the Wild would grab the win and the extra point that goes along with it. Devan Dubnyk got the win to improve to 11-14-2 on the year after stopping 31 of 34 shots in regulation and overtime in the winning effort.

The Edmonton Oilers will look to rebound from a 2-1 overtime loss to the Boston Bruins last time out. Boston opened the scoring, potting the game’s first goal just over eight minutes into the opening period. The Bruins’ lead would hold up through the first and all of the 2nd before Sam Gagner tied the game at one just before the four minute mark of the 3rd period. The rest of the final period couldn’t produce a winner, so it was off to overtime where Boston potted the game-winner just over a minute into extra time. Mike Smith took the loss, falling to 16-10-5 on the year after allowing both goals on 34 shots faced in the losing effort.

Head-to-head, Minnesota is 14-3 in the last 17 meetings between these two teams in Edmonton.

I get that the Wild have had a ton of success in Edmonton over the years, and the even/plus money (depending on where you look) could be worth a shot here based on that and the fact that the Wild finally got their first win under their new coach. However, the Wild still aren’t a great road team, and Edmonton just took a very good Boston team down to the wire on home ice last time out. You also have to imagine that the Oilers will have a little bit of extra pep in their step knowing that their captain, Connor McDavid could possibly return for this game and if it’s not this game, it’ll be very soon. Sometimes that just enough to give the guys an extra push, so I’ll lay the juice with the Oilers at home here.