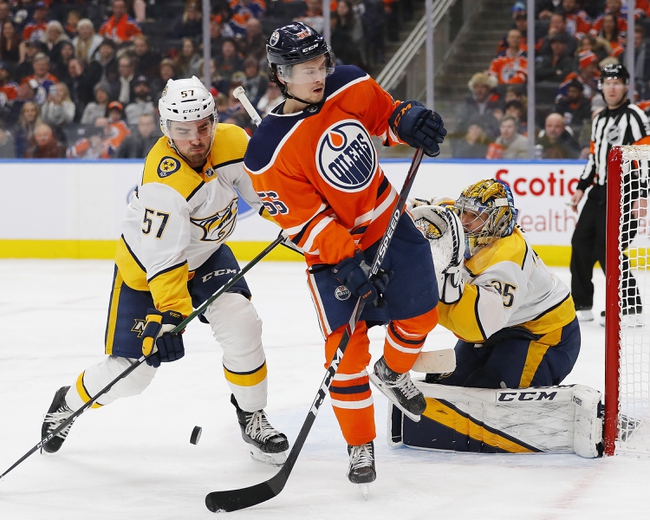 The Nashville Predators travel to Edmonton, AB on Saturday for a game against the Oilers in a matchup of teams from the Western Conference.  In their last game, the Predators defeated the Calgary Flames by the score of 3-2.  Nashville received goals from Mikael Granlund, Dante Fabbro and Kyle Turris On their way to the win.  Goalie Juuse Saros started in net for Nashville and recorded the win, making saves on 37 of 39 Calgary shots on the night.

After their win against the Flames, the Predators record on the season is 26-20-7, good enough for 4th place in the Central Division. Nashville’s points leader is Roman Josi who has 53 points on the season. Filip Forsberg leads Nashville in goals with 18 on the season, including 5 coming while on the power play.  Roman Josi is also Nashville’s leader in assists with 39 on the year. Goalie Pekka Rinne is 17-12-3 on the season and has recorded 3 shutouts and a goals against average of 3.01.  Meanwhile, backup goalie Juuse Saros is 9-8-4 on the year with 1 shutout and a goals against average of 3.03.  Nashville comes into Saturday’s game with 2 players on their injury report as Ryan Ellis is on injured reserve and Calle Jarnkrok is out.

The Edmonton Oilers welcome the Nashville Predators to town on Saturday after losing their last game against the San Jose Sharks by the score of 6-3. The Oilers received goals from Connor McDavid, Sam Gagner and Ethan Bear but it wasn’t enough to beat the Sharks.  Edmonton goalie Mikko Koskinen recorded the loss in net for the Oilers as he allowed 6 goals on the 31 shots he faced against Edmonton.

After the loss against San Jose, Edmonton is now 28-20-6 on the season and is currently in 3rd place in the Pacific Division.  The Edmonton offense runs through Leon Draisaitl who leads the Oilers in points with 83 and assists with 54 on the season.  Connor McDavid leads the Oilers in goals this year with 30.  Edmonton’s goalies have been decent overall so far on the year with Mike Smith recording a record of 13-9-4, with 1 shutout and goals against average of 3.00.  Mikko Koskinen has a record of 15-11-2 with 1 shutout and a goals against average of 2.91. Edmonton enters Saturday’s game with 3 players listed on their injury report as Tomas Jurco and James Neal are out while Joakim Nygard is on injured reserve.