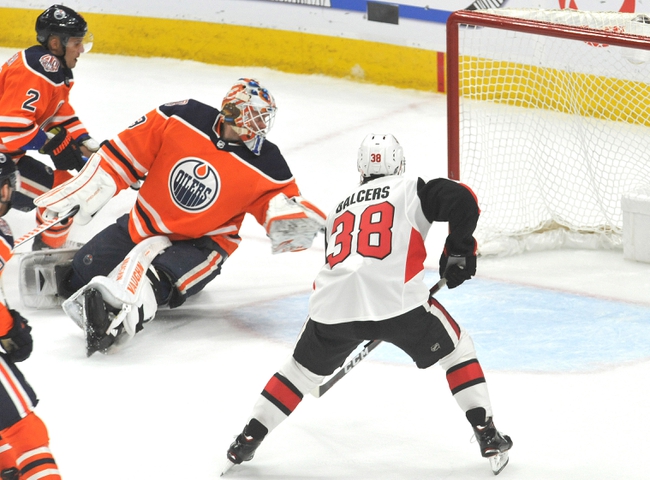 The Ottawa Senators head to Edmonton on Wednesday for a game against the Oilers, but first must play the Vancouver Canucks on Tuesday night.  In their last game the Senators were defeated by the Calgary Flames by the score of 3-1.  The Senators received their lone goal from Jean-Gabriel Pageau with an assist from Thomas Chabot.  Goalie Marcus Hogberg started his first game of the season in net for Ottawa and took the loss in net allowing 2 goals on 26 of Calgary’s shots in the game.

With the loss, Ottawa is 11-15-1, for a total of 23 points which puts them in 7th place in the Atlantic Division.  Ottawa has been led in points and goals by Jean-Gabriel Pageau, who has 20 points and 14 goals on the season. Thomas Chabot leads the Senators in assists with 13, with 4 coming while on the power play.  After the loss, goalie Marcus Hogberg is now 0-1-0 on the season with a goals against average of 2.04. Meanwhile, goalie Anders Nilsson has a record of 7-6-1 and currently has a goals against average of 2.92.  Ottawa comes into Wednesday’s game with 4 players listed on their injury report as Ryan Callahan, Cody Goloubef and Craig Anderson are on injured reserve while Bobby Ryan is listed as day to day.

The Edmonton Oilers welcome the Ottawa Sentaors to town on Wednesday after winning their last game by the score of 3-2 against the Vancouver Canucks.  Edmonton received goals from Josh Archibald and Leon Draisaitl who scored twice in the win.  Edmonton goalie Mikko Koskinen recorded the win in net for the Oilers as he made saves on 30 of the 32 shots he faced against Vancouver.

After the win, Edmonton is now 17-9-3 on the season and is currently in 1st place in the Pacific Division.  The Edmonton offense runs through their star player, Connor McDavid who leads the Oilers in points with 51, goals with 19 and assists with 32 on the season.  Edmonton’s goalies have been strong overall so far on the year with Mike Smith recording a record of 7-7-1, with 1 shutout and goals against average of 2.83.  Mikko Koskinen has a record of 10-2-2 with 1 shutout and a goals against average of 2.52. Edmonton enters Wednesday with 4 players listed on their injury report as Ryan Nugent-Hopkins is on injured reserve while Mike Smith, Zack Kassian and Kris Russell are all listed as day to day.