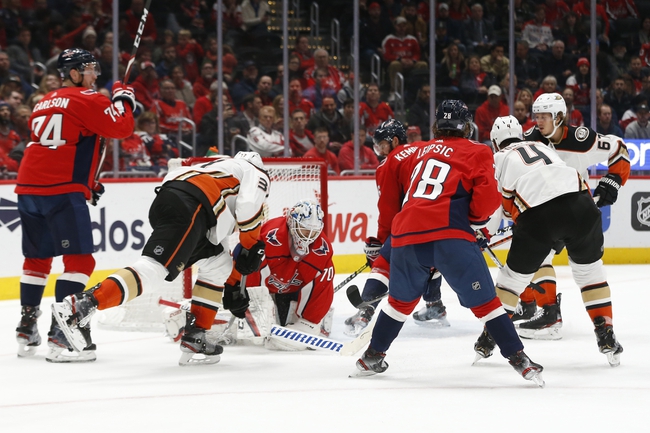 The Anaheim Ducks visit the BB&T Center in Sunrise, Florida Thursday night for an interconference battle with the Florida Panthers. The Ducks are coming off a 5-2 loss to the Washington Capitals on Monday night. This, after snapping a 5-game losing streak with a 4-1 win over the St. Louis Blues on Saturday. The headline coming out of the loss to the Capitals was the fight between Erik Gudbranson and Garnet Hathaway, in which Hathaway was ejected for spitting on Gudbranson.

Four Ducks have tallied double-digit points so far this season, led by Jakob Silfverberg’s 17, thanks to 9 goals and 8 assists. Ryan Getzlaf and Adam Henrique each have 8 goals this year. John Gibson has gotten the majority of the time in net, playing in 17 games, accumulating a 7-10-0 record in front of Ryan Miller for Anaheim.

The Panthers have won two straight and four of five, following Tuesday night’s 5-2 win over the Philadelphia Flyers. Aleksander Barkov and Brett Connolly each had a goal and an assist in the win over the Flyers, giving the Panthers a 6-2-1 record over their last 9 games. Jonathan Huberdeau, Colton Sceviour and Mike Hoffman also scored. Former Flyer Sergei Bobrovsky stopped 35 shots.

Florida has ascended to second place in the Atlantic Division, led by Barkov and Jonathan Huberdeau, who have combined for 55 points so far this season. Huberdeau and Evgenii Dadonov are tied for the team-lead with 10 goals a piece. Bobrovsky has a 3.43 goals against average and is 8-4-4 in the 18 games he’s played in this season.

Panthers have won 4 of their last 5.

The Ducks are a respectable 4-6 on the road this season, but the Panthers have been playing as well as anyone in their division right now and are 5-2-2 in their own barn. Final Score Prediction, the Panthers win and cover ATS, 4-1.