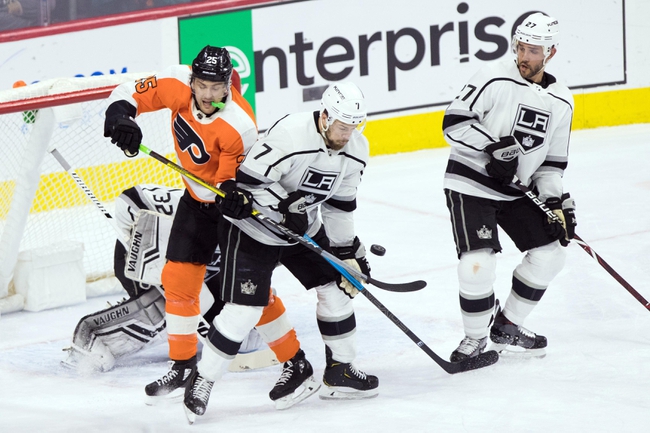 The Philadelphia Flyers go to Staples Center to take on the Los Angeles Kings on Tuesday in Los Angeles, California. The Flyers are coming off of back to back games, playing the San Jose Sharks on Saturday, and then the Anaheim Ducks on Sunday. The Flyers were crushed by the San Jose Sharks 6-1, but then rebounded and defeated the Anaheim Ducks. The Philadelphia Flyers are on a four-game winning streak before the run of back to back games.

The Flyers are 22-12-5 on the season and fourth place in the Atlantic Division with 49 points. Though the Flyer has been decent this season, and have been without Travis Konecny for awhile, who led the team in points, goals, and assists due to a concussion. However, now with Konecny back from the concussion, the Flyers will look to be a new team again.

However, now the Kings are 16-21-4 on the season and are finding it difficult to find a rhythm on offense as Los Angeles only scores 2.54 goals per game. The defense hasn't always been there this season as the Kings, on average, give up 3.12 per game, which is the 20th in the NHL. Anze Kopitar leads the team in all major offensive categories with the most points, goals, and assists. Kopitar made the NHL All-Star Roster this season.

I think the Los Angeles Kings are playing some of their worst hockey of the season and have fallen to be currently one of the worst teams in the NHL. The Kings need to figure a way to drive more offense than just relying on Anze Kopitar. I don't think that Los Angeles is ready to have players step up in the way that they need to, and I believe that they will lose this game to the Philadelphia Flyers. Final Score Prediction, Philadelphia Flyers win 4-1.