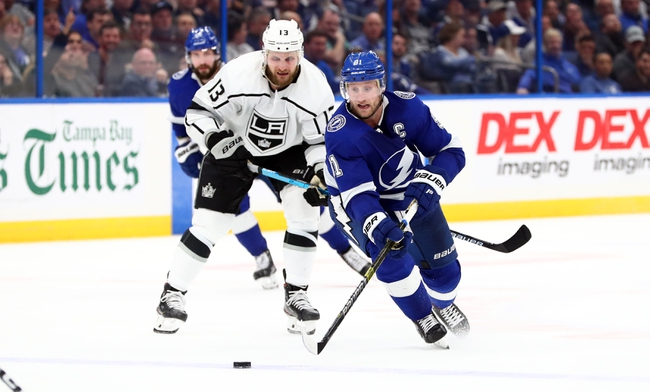 The Tampa Bay Lightning travel to Los Angeles on Wednesday for a game against the Kings, in a matchup of teams from the Eastern and Western Conference.  In their last game, the Lightning were defeated by the Dallas Stars by the score of 3-2 in overtime.  Tampa Bay received both of their goals on the night from Steven Stamkos, but it wasn’t enough to pull out a win.  Andrei Vasilevskiy took the loss in net for the Lightning as he made saves on 32 of 35 Dallas shots on the night.

After the loss against Dallas, the Lightning are now 29-15-5, good enough for 2nd in the Atlantic Division.  Nikita Kucherov leads Tampa Bay in points with 56 and in assists with 34.  Kucherov is also the leading goal scorer for the Lightning as he has scored 22 goals on the year with 4 coming while on the power play.  Lighting goalie Andrei Vasilevskiy is currently 24-9-3 on the season with 2 shutouts and a goals against average of 2.55. Backup goalie Curtis McElhinney is 5-6-2 on the season with a 3.10 goals against average. Tampa Bay comes into the game with a clean bill of health as they do not have anyone listed on their injury report.

The Los Angeles Kings welcome the Tampa Bay Lightning to town on Wednesday after losing their last game to the Philadelphia Flyers by the score of 4-1.  The Kings received their lone goal in the agme from Dustin Brown at 5:06 of the 3rd period on a goal that was score unassisted.  Jack Campbell took the loss in net for the Kings as he allowed 4 goals on 26 of the Flyers’ shots on the night.