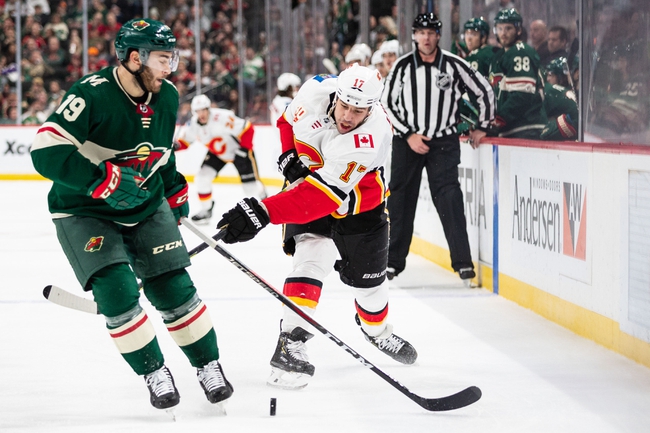 The Calgary Flames travel to Saint Paul, Minnesota to take on the Minnesota Wild on Sunday at the Xcel Energy Center. The Flames are coming off of a win over the New York Rangers, snapping a two-game losing streak that Calgary was on.

The Flames are 21-17-5 on the season and are fifth in the Pacific Division with 47 points so far. The Flames have spread around their offense, having left wing Matthew Tkachuk lead the team in points, Elias Lindholm leads the team in goals, and Johnny Gaudreau leads the team in assists. Tkachuk made the All-Star Game selection as well as defenseman Mark Giordano.

The Wild hasn’t had a remarkable season so far, having a record of 20-17-5. The Wild find themselves middle of the road offensively, but are one of the worst teams in the league in defense, allowing the sixth-most goals per game with 3.32 goals per game allowed. The Wild has one player in the All-Star Game at the moment, with Eric Staal, who is making his sixth appearance. Stall leads the Wild in points and goals this season, having yet another terrific season.

The Flames have not been all that great as of late and have seen themselves fall down the standings. The Minnesota Wild are playing some terrible hockey lately and cannot seem to stop opponents from scoring goals. This is truly a matchup of similar teams, but the Minnesota Wild are an extremely good team at home with a record of 10-4-2 at home. I think that advantage plays a role in a game where the teams are so evenly matched. I think this game goes down to the wire, but the Wild will ultimately defend their arena and win their second game against the Flames this season. Final Score Prediction, Minnesota Wild win 4-3.