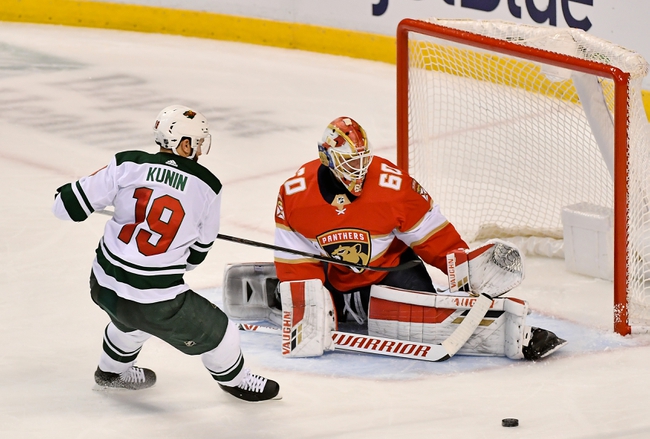 The Florida Panthers travel to Saint Paul, MN on Monday for a game against the Wild in a matchup of teams from the Eastern and Western Conference.  In their last game, Florida defeated the Detroit Red Wings by the score of 4-1.  The Panthers received goals from Evgenii Dadonov, Mark Pysyk, Aleksander Barkov and Denis Malgin on their way to the victory.  Panthers goalie Sergei Bobrovsky started in net and recorded the win, making saved on 27 of 28 Red Wings shots in the game.

The Panthers are now 26-16-5 on the season which puts them in 3rd place in the Atlantic Division. Jonathan Huberdeau leads Florida in points with 64 and in assists with 46 on the season.  Evgenii Dadonov leads Florida in goals as he has recorded 21 so far this year with 9 coming while on the power play.  Panthers goalie Sergei Bobrovsky is 17-12-4 with 1 shutout and a 3.22 goals against average.  Florida’s other goalie, Chris Driedger is 5-2-0, with 1 shutout and a goals against average of 2.35. Florida enters Monday’s game with 2 players listed on their injury report as Sergei Bobrovsky is listed as day to day while Chris Driedger is out.

The Minnesota Wild welcome the Florida Panthers to town on Monday after winning their last game against the Dallas Stars by the score of 7-0.  The Wild received goals from Jared Spurgeon, Carson Soucy, Jason Zucker, Ryan Donato, Mats Zuccarello, Zach Parise and Ryan Hartman on their way to the win.  Minnesota goalie Alex Stalock recorded the win in net for the Wild as he made saves on all 27 of the Stars shots in the game.

After the win against Dallas, Minnesota is now 22-20-6 on the season and are currently 7th place in the Central Division.  Eric Staal leads the Wild in points on the season with 35.  Zach Parise leads Minnesota in goals on the year with 18, including 8 on the power play.  Ryan Suter leads the Wild in assists on the season with 26, including 11 on the power play.  Goalie Alex Stalock is currently 11-7-3 on the season with 2 shutouts and a goals against average of 2.83.  Devan Dubnyk has a record of 8-12-2 on the year with 1 shutout and a goals against average of 3.35.  The Wild enter Monday’s game with 2 players listed on their injury report as Mikko Koivu is listed as day to day while Brad Hunt is out.