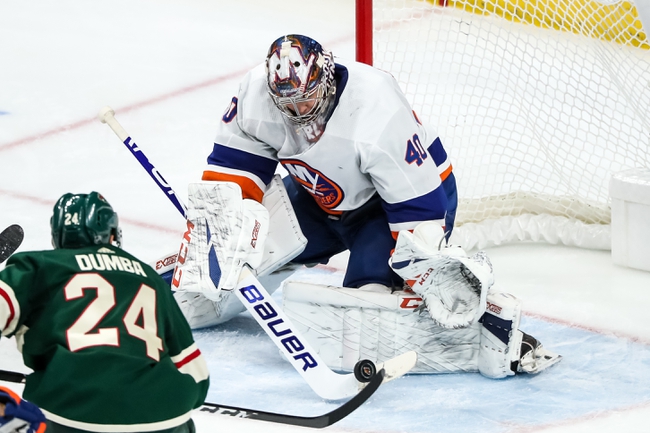 The New York Rangers and the Minnesota Wild meet in NHL action from the Xcel Energy Center on Thursday night.

The New York Rangers will look to build on back-to-back wins after a 4-1 win over Winnipeg last time out. Chris Kreider opened the scoring with the lone goal of the 1st period, coming late in the frame. Kreider doubled his tally and doubled the Rangers lead early on in the 2nd before Ryan Strome and Mika Zibanejad pushed the lead to 4-0 early in the 3rd with a pair of goals :35 apart. Winnipeg pulled a goal back later in the 3rd period, but all it turned out to be was a consolation goal as the Rangers held on the rest of the way for a big road win. Igor Shesterkin got the win to improve to 6-1-0 on the year after stopping 42 of 43 shots faced in the winning effort.

The Minnesota Wild will look to build on a 4-0 win over Vegas in their last outing. Joel Eriksson Ek opened the scoring just 5:30 into the game before Jared Spurgeon doubled Minnesota’s lead later in the opening period. Kevin Fiala and Zach Parise scored just over six minutes apart in the 2nd period to push the Wild’s lead to 4-0, a lead that would be insurmountable the rest of the way as the 3rd period didn’t see much action, including 9 combined shots on goal between the two sides. Alex Stalock got the win to improve to 14-8-3 on the year after stopping all 26 shots faced in the winning effort for his 3rd shutout of the season.

I’ve gone back and forth on this game, as New York has stepped up their play lately, but the Wild have had success in this matchup and have performed well at home. Instead of trying to pick a side though, I’m going to side with the under. Both of these teams have been involved in their fair share of low scoring games as of late, and any way I slice it, I just see it being a 3-1 or 3-2 style of game. I just think this ends up being a lower-scoring more physical style of hockey, so give me the under here.