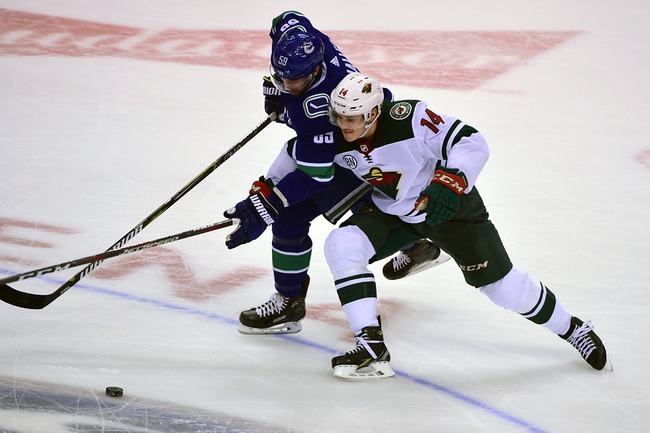 The Vancouver Canucks go to Saint Paul, Minnesota to take on the Minnesota Wild on Sunday at the Xcel Energy Center. The Canucks are on a two-game losing streak, falling to the Florida Panthers as well as having a dominating loss to the Tampa Bay Lighting. The loss to the Lightning snapped a seven-game winning streak that the Canucks were on. The Tampa Bay Lightning came into the game with a seven-game winning streak, and the Canucks lost a game between arguably the two best hockey teams in the NHL. The loss isn’t a big deal, but the way they lost is a huge deal. The Canucks fell to the Tampa Bay Lightning 9-2, but now that the Canucks lost to the Panthers, it is a bit concerning.

Vancouver is 23-17-4 on the season, and have primarily had the good record they have due to their offense, finding ways to score in bunches. Their leading goal scorer Elias Patterson leads the team in 20 goals and also leads the team in points with 46

The Minnesota Wild are on a two-game losing streak, losing to the Calgary Flames both times. The Wild have went on two separate losing streaks in the last two games.

The Wild hasn’t had a remarkable season so far, having a record of 20-18-6. The Wild find themselves middle of the road offensively, but are one of the worst teams in the league in defense, allowing the seventh-most goals per game with 3.27 goals per game allowed. The Wild has one player in the All-Star Game at the moment, with Eric Staal, who is making his sixth appearance. Stall leads the Wild in points and goals this season, having yet another terrific season.

This game is challenging to predict, because of the way that Vancouver is playing at the moment. Just a few games ago, the Canucks were one of the hottest teams in the NHL. Now, it is a little concerning that they lost to the Florida Panthers, and they may not be as good as the win streak made them look to be. However, I think they are still better than the Minnesota Wild, and should come out of this game with a victory. Final Score Prediction, Vancouver Canucks win 5-3.