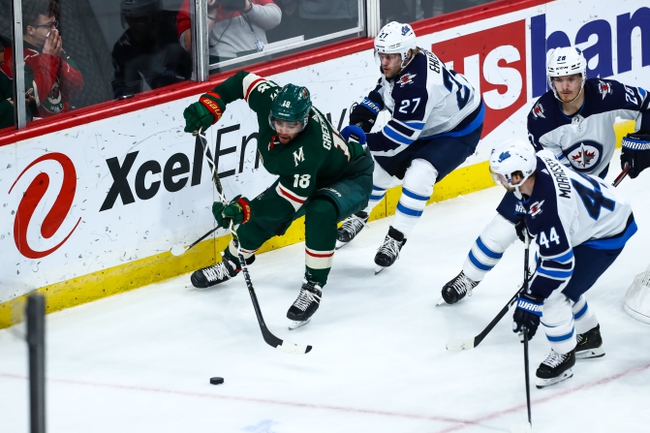 The Winnipeg Jets head to St. Paul, Minnesota on Saturday for a game against the Wild in a matchup of two teams from the Central Division.  The Jets come into their game on Saturday after losing their last game to the Toronto Maple Leafs by the score of 6-3.  Winnipeg received goals from Kyle Connor, Patrik Laine and Mark Scheifele, but it wasn’t enough to come away with the win against Toronto.  Connor Hellebuyck started in net for the Jets and took the loss, allowing 5 goals on 17 shots before being replaced by Laurent Brossoit who made saves on 10 of 11 Toronto shots.

The Winnipeg Jets are now 22-16-3 on the season, good enough for 4th place in the Central Division. The Jets are led in points by Mark Scheifele who has totaled 46 on the season.  Scheifele also leads Winnipeg in assists on the season with 27.  Kyle Connor leads the Jets in goals so far this year as he has tallied 21, including 7 while on the power play.  The Jets have received solid goaltending all season from goalie Connor Hellebuyck who has a record of 18-12-3 to go along with 3 shutouts and a goals against average of 2.70.  Backup goalie Laurent Brossoit is currently 4-4-0 on the season with a goals against average of 3.50. The Jets come into Saturday’s game with 1 player listed on their injury report as Nathan Beaulieu is listed as out.

The Minnesota Wild welcome the Winnipeg Jets to St. Paul on Saturday after losing their last game against the Toronto Maple Leafs by the score of 4-1.  The Wild received their lone goale from Ryan Suter on the power play at 11:46 of the 2nd period with assists from Kevin Fiala and Mikko Koivu.  Minnesota goalie Devin Dubnyk took the loss in net for the Wild as he allowed 4 goals on 29 Toronto shots in the game.