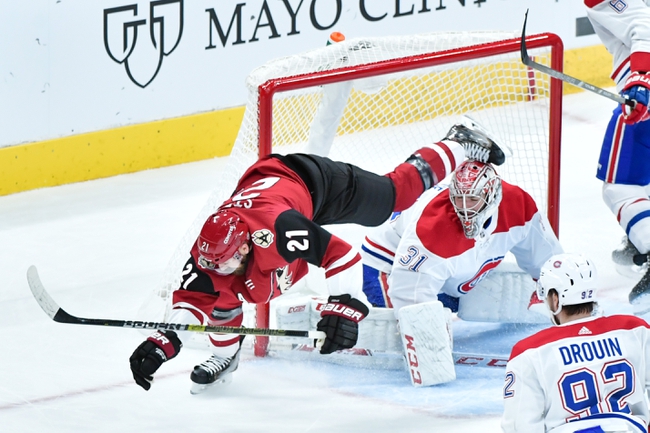 The Arizona Coyotes travel to Montreal, QC on Monday for a game against the Canadiens in a matchup of teams from the Western and Eastern Conference.  In their last game, Arizona was defeated by the Boston Bruins by the score of 4-2.  The Coyotes received goals from Phil Kessel and Jakob Chychrun but it wasn’t enough to pull out a win against the Bruins.  Arizona goalie Adin Hill started in net for Arizona and took the loss after allowing 3 goals on 32 shots in the game.

With the loss against Boston, the Coyotes are now 27-23-7 on the season which places them in 5th place in the Pacific Division.  Nick Schmaltz leads the Coyotes in points with 39 and in assists with 31 on the season.  The Arizona leader in goals is Conor Garland who has recorded 19 goals on the season, including 3 on the power play.  Goalie Adin Hill has a record of 2-3-2 with a goals against average of 2.54.  Goalie Antti Raanta is 10-12-3 on the year with 2 shutouts and a goals against average of 2.86.  The Coyotes enter Monday’s game with 5 players listed on their injury report as Darcy Kuemper and Jason Demers are on injured reserve, Barrett Hayton is day to day while Oliver Ekman-Larsson and Antti Raanta are listed as out.

The Montreal Canadiens welcome the Arizona Coyotes to town on Monday after winning their last game against the Toronto Maple Leafs by the score of 2-1 in overtime.  The Canadiens received their lone goal in regulation from Marco Scandella at 17:27 of the 3rd period and Ilya Kovalchuk finished the game in overtime.  Montreal goalie Carey Price recorded the win in net as he made saves on 22 of the 23 Maple Leafs shots in the game.

After the win against Toronto, Montreal is 27-23-7 which puts them in a 5th place in the Atlantic Division.  The Canadiens are led in points by Tomas Tatar as he has recorded 51 points on the season.  Tatar also leads Montreal in goals this season with 20.  Tatar is also the assists leader for the Canadiens as he has recorded 31 on the year.  Goalie Carey Price is currently 24-18-4, with 3 shutouts on the season and has a goals against average of 2.69.  The Canadiens other goalie is Charlie Lindgren who has a record of 1-3-0 with a goals against average of 3.48.  Montreal enters their game against Arizona with 5 players listed on their injury report as Jonathan Drouin is on injured reserve whole Jordan Weal, Ryan Poehling, Tomas Tatar and Victor Mete are all listed as day to day.

The Arizona Coyotes have scored an average of 2.73 goals per game on the year while allowing 2.66 goals per game.  The Montreal Canadiens have scored 3.05 goals per game this season while allowing 3.05 goals per game.  In their last 5 games, the Coyotes are 1-4 and have lost 2 games in a row while the Canadiens are 4-1 and have won 3 games in a row.  The Canadiens won the first meeting of the season between these two teams by the score of 4-1 in a game played at Arizona.  The total has gone under in 12 of Montreal's last 15 games at home.  Montreal is 14-4-2 in their last 20 games when playing at home against Arizona.  I am going with the Canadiens in this one.  Montreal wins 3-1.