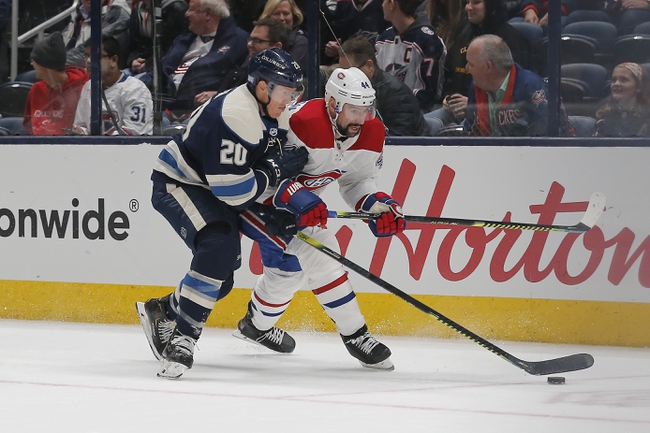 The Columbus Blue Jackets travel to Montreal, QC on Sunday for a game against the Canadiens, but first must play the Buffalo Sabres on Saturday.  In their last game, the Blue Jackets defeated the Winnipeg Jets by the score of 4-3.  Columbus received 2 goals from Oliver Bjorkstrand to go along with goals from Seth Jones and Gustav Nyquist on their way to the win.  Columbus goalie Elvis Merzlikins started in net for the Blue Jackets and picked up the win, making saves on 27 of 30 Winnipeg shots on the night.

Heading into Saturday’s game, the Blue Jackets are 27-16-8 and are currently in 4th place in the Metropolitan Division. The Blue Jackets leader in points is Pierre-Luc Dubois who has recorded 38 so far this season.  The Blue Jackets are also led in assists by Dubois who has 23 assists with 8 coming while on the power play.  The Columbus goals leader is Oliver Bjorkstrand who has 16 goals on the season.  Columbus goalie Matiss Kivlenieks is 1-0-0 on the season with a goals against average of 1.00.  Meanwhile, goalie Elvis Merzlikins is 9-6-4 with 3 shutouts and a goals against average of 2.39 on the season.  The Blue Jackets come into Saturday’s game with 1 player listed on their injury report as Josh Anderson is on injured reserve.

The Montreal Canadiens welcome the Columbus Blue Jackets to town on Sunday, but first must play the Florida Panthers on Saturday. In their last game, the Canadiens defeated the Buffalo Sabres by the score of 3-1.  The Canadiens received goals from Ilya Kovalchuk, Brendan Gallagher and Tomas Tatar on their way to the win against the Sabres.  Montreal goalie Carey Price recorded the win in net as he made saves on all 20 of the 21 Buffalo shots in the game.

After the win against Buffalo, Montreal is 23-22-7 which puts them in a 5th place in the Atlantic Division.  The Canadiens are led in points by Tomas Tatar as he has recorded 46 points on the season.  Tatar also leads Montreal in goals this season with 18.  Tatar is also the assists leader for the Canadiens as he has recorded 28 on the year.  Goalie Carey Price is currently 21-17-4, with 2 shutouts on the season and has a goals against average of 2.80.  The Canadiens other goalie is Charlie Lindgren who has a record of 0-3-0 with a goals against average of 3.40.  Montreal enters their game against Florida with 5 players listed on their injury report as Paul Byron and Jonathan Drouin are on injured reserve while Artturi Lehkonen, Brendan Gallagher and Max Domi are listed as day to day.