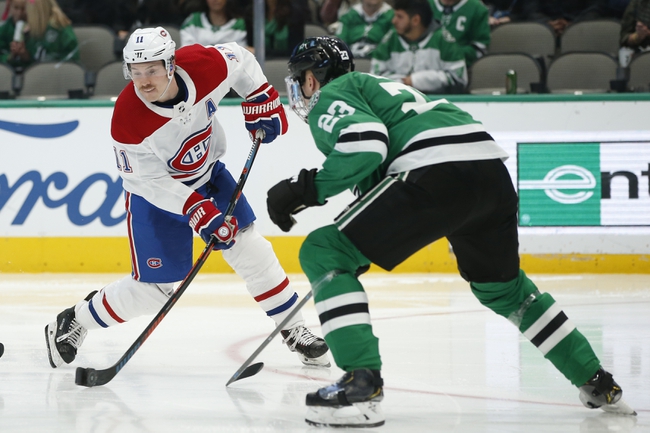 The Dallas Stars and the Montreal Canadiens meet in NHL action from the Bell Centre on Saturday night.

The Dallas Stars will look to add to their current three-game winning streak after a 3-2 win over Toronto last time out. Denis Gurianov opened the scoring just over a minute into the game and Radek Faksa would double the lead :24 into the 2nd period. Toronto would pull a goal back just after the midway point of the 2nd period but Tyler Seguin would restore the two-goal cushion early on in the 3rd period. The Leafs would make things interesting late, cutting the deficit to 3-2 with just over a minute to go, but the Stars would hold on for a big-time road win. Ben Bishop got the win to improve to 19-12-4 on the year after stopping 29 of 31 shots faced in the winning effort.

The Montreal Canadiens will be out to snap a three-game losing streak after a 4-1 loss to Pittsburgh in their last outing. The game was scoreless through the opening 20 minutes before Pittsburgh took the lead just past the seven minute mark of the 2nd period. The Pens doubled the lead with two minutes to go in the 2nd but Montreal would respond just 1:06 later thanks to a goal from Tomas Tatar. Tatar’s marker was cancelled out just :36 after that though as Pittsburgh restored their two-goal lead and despite outshooting Pittsburgh 18-8 in the 3rd period, the Habs wouldn’t get any closer as Pittsburgh potted an empty-netter with just under two minutes to play. Carey Price took the loss, falling to 24-21-4 on the year after allowing 3 goals on 27 shots faced in the losing effort.

I get that Montreal is at home and I’ve said that this part of the season is key to Montreal making a legit playoff push down the stretch to save their season, but the Habs have fallen flat on their faces since then, and have done so playing pretty good teams. Another problem for Montreal is that Dallas is another good team that’s coming rolling into their building and the Stars are looking more and more dangerous like the team we have seen earlier this season that was taking names left and right. I just don’t see Montreal having an answer for the Stars here who have played well on the road, so I’ll side with Dallas to pick up another road win here.