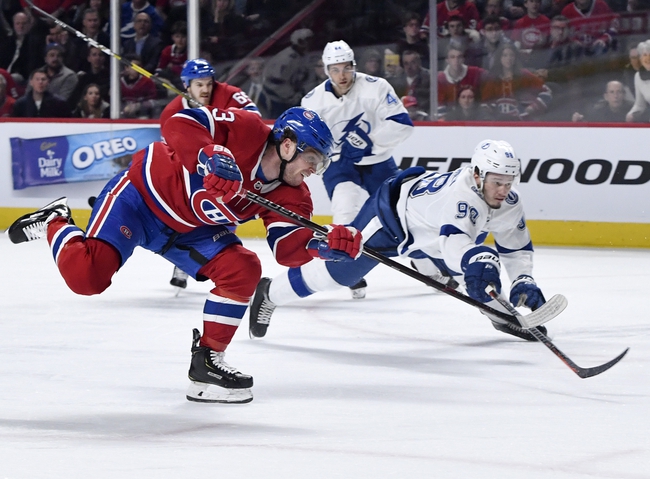 The Tampa Bay Lightning look to bounce back from a loss when they visit the Montreal Canadians on Tuesday. The Lightning were defeated by the Ottawa Senators on Saturday 4-2. Scoring in the loss for Tampa Bay were Luke Witkowski and Ongrej Palat. Curtis McEilhinney made 30 saves in net for Tampa Bay. The Lightning are off to a surprisingly mediocre 2-2-1 start.

Montreal looks for its second straight victory when hosting Tampa Bay after defeating the St. Louis Blues 6-3 on Saturday. Brendan Gallagher scored one goal and assisted on two others, while Jonathan Drouin, Tomas Tatar, Arturri Lehkonen, Philip Danault and Max Domi scored for Montreal as well. Carey Price stopped 26 shots in net for the Canadians.

Joel Armia leads Montreal in goals scored, while Jonathan Drouin leads in assists with four and Brendan Gallagher leads in points with six. Carey Price is 2-1-1 with goals against of 3.38 and save percentage of .901. Montreal is scoring an average of 4.00 goals per game while allowing 4.00 per game.

The OVER has cashed in 5 of the Canadians last 6

Take the OVER in this matchup of Eastern Conference rivals. The OVER has cashed in 5 of Montreal’s last 6, in 4 of the Canadians last 6 at home and in each of Montreal’s last 4 when the underdog. Tampa Bay has seen the OVER cash in 4 of its last 5 on the road and 8 of its last 10 versus an opponent from the Atlantic division. Final Score Prediction, Tampa Bay Lightning win, but our best play is OVER 6-3