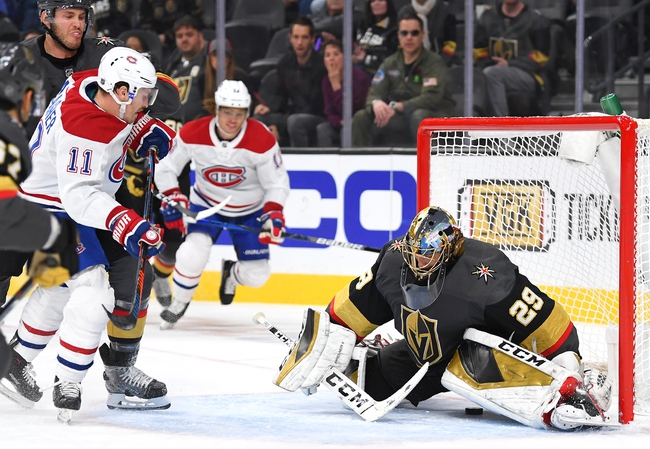 The Vegas Golden Knights travel to Montreal on Saturday for a game against the Canadiens in a matchup of teams from the Western and Eastern Conference.  In their last game, Vegas defeated the Ottawa Senators by the score of 4-2.  The Golden Knights received goals from Paul Stastny, Mark Stone, Chandler Stephenson and Ryan Reaves on their way to the victory.  Marc-Andre Fleury started in net for Vegas and recorded the win, making saves on 33 of the 35 Senators shots on the night.

After the win against Ottawa, Vegas is now 25-19-6 and are currently in 3rd place in the Pacific Division.  Max Pacioretty leads the Golden Knights in points on the year with 46.  Pacioretty also leads Vegas in goals with 20 on the season, with 5 goals coming while on the power play. Mark Stone leads Vegas in assists with 28 on the season.  Vegas goalie Marc-Andre Fleury is currently 19-11-3 with 2 shutouts and a goals against average of 2.82 this season.  Meanwhile, backup goalie Malcolm Subban is 6-7-3 with a goals against average of 3.04. The Knights come into Saturday’s game with 3 players listed on their injury report as Cody Glass and William Karlsson are listed as out while Jonathan Marchessault is listed as day to day.

The Montreal Canadiens welcome the Vegas Golden Knights to town on Saturday after winning their last game against the Philadelphia Flyers by the score of 4-1.  The Canadiens received goals from Tomas Tatar, Artturi Lehkonen and 2 goals from Ilya Kovalchuk on their way to the win against the Flyers.  Montreal goalie Carey Price recorded the win in net as he made saves on all 40 of the 41 Flyers shots in the game.

After the win against Calgary, Montreal is 21-21-7 which puts them in a 6th place in the Atlantic Division.  The Canadiens are led in points by Tomas Tatar as he has recorded 43 points on the season.  Tatar also leads Montreal in goals this season with 17.  Tatar is also the assists leader for the Canadiens as he has recorded 26 on the year.  Goalie Carey Price is currently 19-16-4, with 2 shutouts on the season and has a goals against average of 2.82.  The Canadiens other goalie is Charlie Lindgren who has a record of 0-3-0 with a goals against average of 3.40.  Montreal enters their game against Vegas with 2 players listed on their injury report as Brendan Gallagher is out while Joel Armia is on injured reserve.