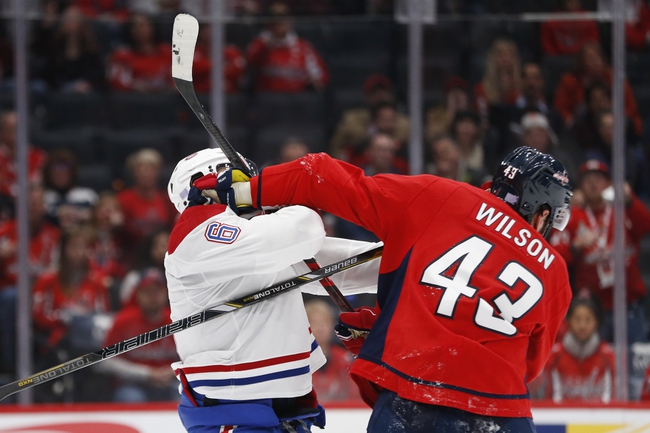 The Washington Capitals travel to Montreal on Monday for a game against the Canadiens in a matchup of teams from the Metropolitan Division.  In their last game, Washington defeated the New York Islanders by the score of 6-4.  The Capitals received goals from Carl Hagelin, Tom Wilson, Jakub Vrana and 3 goals from Alex Ovechkin.  Both Washington goalie saw action in the game as Braden Holtby allowed 4 goals on 22 shots while Ilya Samsonov stopped all 7 shots that he faced.

With the win against the Islanders, the Capitals are now 33-11-5 on the season, good enough for 1st place in the Metropolitan Division.  Washington is led in points by John Carlson who has recorded 60 points on the season.  Carlson is also Washington’s leader in assists on the year as he has recorded 47 so far this season.  Alex Ovechkin leads the Capitals in goals on the season with 34, with 11 coming while on the power play.  Goalie Braden Holtby is currently 18-9-4 on the season with a goals against average of 3.09. Backup goalie Ilya Samsonov has recorded a record of 15-2-1 on the year in net with 1 shutout and a goals against average of 2.06. Washington comes into Monday’s game with 1 player listed on their injury report as Alex Ovechkin is out while serving a suspension.

The Montreal Canadiens welcome the Washington Capitals to town on Monday after winning their last game against the Vegas Golden Knights by the score of 5-4 in a shootout.  The Canadiens received goals from Ilya Kovalchuk, Joel Armia and 2 goals from Nick Cousins on their way to the win against the Golden Knights.  Montreal goalie Carey Price recorded the win in net as he made saves on all 30 of the 34 Golden Knights’ shots in the game.

After the win against Vegas, Montreal is 22-21-7 which puts them in a 6th place in the Atlantic Division.  The Canadiens are led in points by Tomas Tatar as he has recorded 43 points on the season.  Tatar also leads Montreal in goals this season with 17.  Tatar is also the assists leader for the Canadiens as he has recorded 26 on the year.  Goalie Carey Price is currently 20-16-4, with 2 shutouts on the season and has a goals against average of 2.84.  The Canadiens other goalie is Charlie Lindgren who has a record of 0-3-0 with a goals against average of 3.40.  Montreal enters their game against Washington with a clean bill of health as they do not have anyone listed on their injury report.