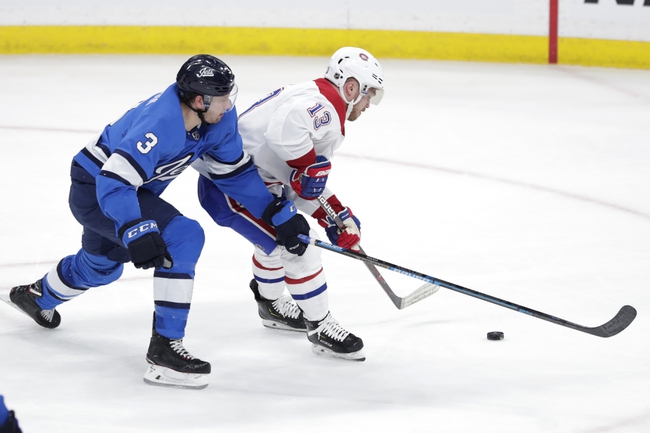 The Winnipeg Jets head to Montreal, Quebec on Monday for a game against the Canadiens in a matchup of two Canadian teams.  The Jets come into their game on Monday after losing their last game to the Minnesota Wild by the score of 3-2 in overtime.  Winnipeg received goals from Mark Scheifele and Blake Wheeler with both goals coming on the power play, but it wasn’t enough to come away with the win against Minnesota.  Connor Hellebuyck started in net for the Jets and took the loss, allowing 3 goals on 44 shots on the day.

The Winnipeg Jets are now 22-16-4 on the season, good enough for 4th place in the Central Division. The Jets are led in points by Mark Scheifele who has totaled 48 on the season.  Scheifele also leads Winnipeg in assists on the season with 28.  Kyle Connor leads the Jets in goals so far this year as he has tallied 21, including 7 while on the power play.  The Jets have received solid goaltending all season from goalie Connor Hellebuyck who has a record of 18-12-4 to go along with 3 shutouts and a goals against average of 2.71.  Backup goalie Laurent Brossoit is currently 4-4-0 on the season with a goals against average of 3.50. The Jets come into Monday’s game with 4 players listed on their injury report as Nathan Beaulieu is listed as out while Dmitry Kulikov, Andrew Copp and Bryan Little are all on injured reserve.

The Montreal Canadiens welcome the Winnipeg Jets to town on Monday after losing their last game to the Pittsburgh Penguins by the score of 3-2 in overtime.  The Canadiens received 2 goals from Artturi Lehkonen but it wasn’t enough to pull out a win against the Penguins.  Montreal goalie Carey Price took the loss in net as he allowed 3 goals on 37 Pittsburgh shots in the game.

After the loss against Pittsburgh, Montreal is 18-17-7 which puts them in a 6th place in the Atlantic Division.  The Canadiens are led in points by Tomas Tatar as he has recorded 35 points on the season.  Tatar also leads Montreal in goals this season with 16.  The assists leader for Montreal is Max Domi who has recorded 20 on the year.  Goalie Carey Price is currently 16-14-4, with 1 shutout on the season and has a goals against average of 3.00.  The Canadiens other goalie is Charlie Lindgren who has a record of 0-1-0 with a goals against average of 2.05.  Montreal enters their game against Winnipeg with 5 players listed on their injury report as Matthew Peca, Joel Armia, Jonathan Drouin and Paul Byron are all on injured reserve while Ilya Kovalchuk is listed as out.

The Winnipeg Jets have scored 3.05 goals per game this season while allowing 3.05 goals per game.  The Montreal Canadiens have scored 3.14 goals per game on the year while allowing 3.21 goals per game.  In their last 5 games, the Jets are 1-4 while the Canadiens are 0-5.  Montreal won the first meeting of the year between these two teams by the score of 6-2 in a game played in Winnipeg.  Montreal has won the last 3 meetings between these two teams by the average score of 4.67 to 1.67.  The total has gone over in 8 of Montreal's last 10 games against Winnipeg. Montreal is 8-3 in their last 11 games when playing at home against Winnipeg.  Although Montreal has not played well as of late, I expect their dominance over Winnipeg to continue in this one.  Montreal wins 5-3.