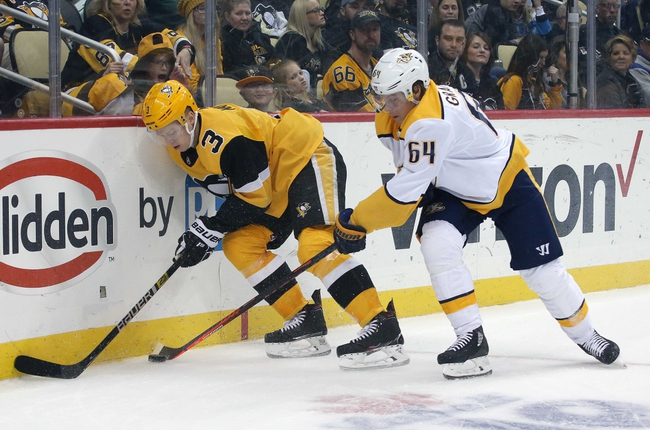 The Pittsburgh Penguins head to Nashville, Tennessee, on Friday at the Bridgestone Arena to face the Nashville Predators. The Penguins are coming off of a 4-1 loss to the Vancouver Canucks. The loss snapped the Penguins' four-game winning streak. The Penguins defeated the Columbus Blue Jackets, Los Angeles Kings, Calgary Flames, and the Edmonton Oilers in their winning streak.

Pittsburgh is 21-11-4 on the season and fourth in the Metropolitan Division. The Penguins have been a middle of the road team this season but have been stellar on the offensive end, scoring 3.28 goals per game, which is seventh in the NHL. However, now the Pittsburgh Penguins are hit with injuries as their star, Sidney Crosby, will be out of this game.

The Nashville Predators are coming on a two-game winning streak, and have had to give their fans anxiety in each other last three games, defeating the Arizona Coyotes in their previous game 3-2. Before the win over the Coyotes, the Predators lost to the Ottawa Senators in overtime. Hopefully, for the fans, the Predators can win without worry soon.

The Predators are 18-12-6 on the season with a home record of 10-6-4. The Predators are currently fifth in the Central Division. Defender Roman Josi has the most points out of anyone on the team, getting 35 points with 14 points and 21 assists.

With Pittsburgh losing Sidney Crosby for the moment, they are likely going to be struggling for the next week or two. It's the perfect timing for the Predators to play the Penguins as they are down. Pittsburgh does have the edge over Nashville, as the Penguins are 14-6 in the last 20 meetings against Nashville, but I do not think that they will get the away win in this one with Crosby. Final Score Prediction, Nashville Predators win 5-4.