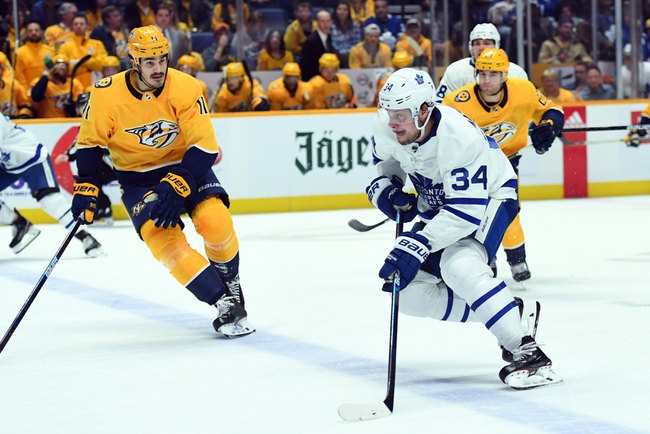 The Toronto Maple Leafs head to Nashville, TN on Monday for a game against the Predators in a matchup of teams from the Eastern and Western Conference.  In their last game, the Maple Leafs were defeated by the Chicago Blackhawks by the score of 6-2.  Toronto received goals from William Nylander and Alexander Kerfoot, but it wasn’t enough to come out on top.  Maple Leafs goalie Frederick Anderson got the start in net for Toronto and took the loss as he allowed 6 goals on 34 Chicago shots in the game.

On the season, the Maple Leafs are currently 25-17-7 and are currently in 4th place in the Atlantic Division.  Austin Matthews leads Toronto in points with 57 and goals with 34. Mitch Marner leads Toronto in assists on the season with 34. Goalie Frederick Anderson is 22-9-6 on the season with 1 shutout and a 2.89 goals against average. Backup goalie Michael Hutchinson is 3-7-1 with 1 shutout and a goals against average of 3.83.  Toronto enters Monday’s game with 2 players listed on their injury report as Auston Matthews is listed as day to day while Jake Muzzin is on injured reserve.

The Nashville Predators welcome the Toronto Maple Leafs to town on Monday after winning their last game against the Buffalo Sabres by the score of 2-1.  Nashville received goals from Ryan Johansen and Craig Smith on their way to the win. Pekka Rinne started in net for Nashville and recorded the win as he made saves on 30 of 31 Buffalo shots on the night.

After their win against the Sabres, the Predators record on the season is 22-18-7, good enough for 7th place in the Central Division. Nashville’s points leader is Roman Josi who has 48 points on the season. Filip Forsberg leads Nashville in goals with 16 on the season, including 4 coming while on the power play.  Roman Josi is also Nashville’s leader in assists with 34 on the year. Goalie Pekka Rinne is 16-10-3 on the season and has recorded 3 shutouts and a goals against average of 2.95.  Meanwhile, backup goalie Juuse Saros has not been as good and is 6-8-4 on the year with a goals against average of 3.13.  Nashville comes into Monday’s game with a clean bill of health as they do not have anyone listed on their injury report.