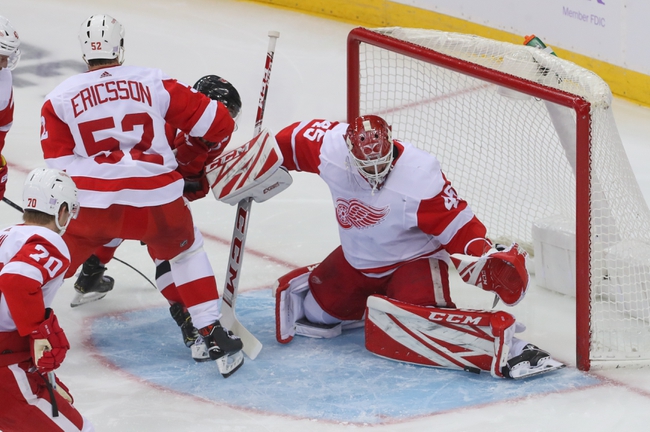 The Detroit Red Wings and the New Jersey Devils meet in NHL action from the Prudential Center on Thursday night.

The Detroit Red Wings will look to rebound from a 3-2 loss to Buffalo last time out. Darren Helm opened the scoring for Detroit just :27 into the game before Buffalo tied the game at one just :36 later. Helm restored Detroit’s lead just over seven minutes into the 2nd period before Buffalo tied the game at two with just over five minutes to go in the 2nd period. The Sabres took their first lead in the opening minute of the 3rd and despite Detroit outshooting Buffalo 10-5 in the 3rd, the Wings wouldn’t find an equalizing goal as Buffalo held on for the win. Jonathan Bernier took the loss, falling to 12-15-2 on the year after allowing 3 goals on 25 shots faced in the losing effort.

The New Jersey Devils will be out to rebound from a 5-3 loss to Florida last time out. Jack Hughes opened the scoring just 3:18 into the game before Florida surged ahead by the end of the opening period. Florida went up 3-1 within the first 2:43 of the 2nd period before Kevin Rooney pulled a goal back in the 2nd for the Devils. Florida restored the two-goal lead before going up 5-2 just :39 after that. Kyle Palmieri pulled the score back to 5-3, but despite outshooting Florida 13-9 in the 3rd, the Devils wouldn’t get any closer as Florida held on for the win. Louis Domingue took the loss, falling to 3-6-2 on the year after allowing 5 goals on 33 shots faced in the losing effort.

The plus money is tempting given how much success the Red Wings have had in this matchup, but the problem is that Detroit is still Detroit, and the Red Wings just keep losing games and are providing no value in the underdog role. New Jersey isn’t a kind of team I’m looking to lay heavy prices with, but the Devils are just playing better than Detroit right now and don’t have as many problems when you stand the two sides side-by-side. I’ll side with New Jersey here and to get the price down, I’ll take the Devils to get the job done in regulation.