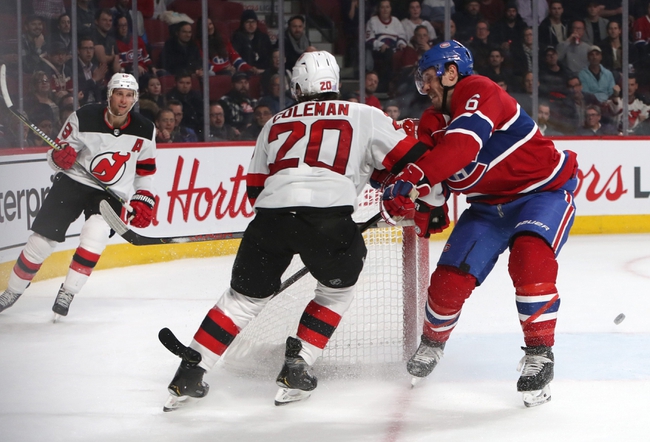 The Montreal Canadiens head to Newark, NJ on Tuesday for a game against the Devils in a matchup of two teams in the Eastern Conference.  In their last game, the Canadiens were defeated by the Columbus Blue Jackets by the score of 4-3.  The Canadiens received goals from Tomas Tatar, Max Domi and Shea Weber, but it wasn’t enough to come out on top against the Blue Jackets.  Montreal goalie Carey Price took the loss in net as he allowed 3 goals on 26 Columbus shots in the game.

After the loss against Columbus, Montreal is 24-23-7 which puts them in a 5th place in the Atlantic Division.  The Canadiens are led in points by Tomas Tatar as he has recorded 49 points on the season.  Tatar also leads Montreal in goals this season with 20.  Tatar is also the assists leader for the Canadiens as he has recorded 29 on the year.  Goalie Carey Price is currently 22-18-4, with 3 shutouts on the season and has a goals against average of 2.75.  The Canadiens other goalie is Charlie Lindgren who has a record of 0-3-0 with a goals against average of 3.40.  Montreal enters their game against New Jersey with 3 players listed on their injury report as Jonathan Drouin and Paul Byron are on injured reserve while Noah Juulsen is day to day.

The New Jersey Devils welcome the Montreal Canadiens to town on Tuesday, after losing their last game against the Dallas Stars by the score of 3-2 in overtime.  New Jersey received goals from Kevin Rooney and Nico Hischier but it wasn’t enough to beat Dallas.  Louis Domingue started in net for the Devils and recorded the loss, allowing 3 goals on 31 Dallas shots in the game.

After the loss against the Stars, the Devils are now 18-24-9 on the season which places them in 8th place in the Metropolitan Division.  Kyle Palmieri leads the Devils in points with 33 on the year.  The Devils leading goal scorer is Blake Coleman who has recorded 19 so far this season. Nikita Gusev leads the Devils in assists on the year with 22.  Goalie Mackenzie Blackwood is 15-12-7 with 1 shutout and a 3.00 goals against average.  Backup goalie Louis Domingue is 3-5-1 with a goals against average of 3.57.  New Jersey enters Tuesday’s game with 1 player listed on their injury report as P.K. Subban is listed as day to day.

The Montreal Canadiens have scored an average of 3.04 goals per game this year while allowing 3.06 goals per game.  The New Jersey Devils have scored 2.63 goals per game on the season while allowing 3.53 goals per game.  In their last 5 games, the Canadiens are 3-2 while the Devils are 1-4 and have lost 2 games in a row.  The Devils have won both meetings between these two teams so far this season, winning by the score of 4-3 in overtime and 6-4 with both games being played in Montreal.  The total has gone under in 11 of Montreal's last 15 games.  The total has gone over in 12 of New Jersey's last 18 games. Montreal is 1-4 in their last 5 games against an opponent in the Metropolitan Division.  I am going with the Devils in this one.  New Jersey wins 3-2.