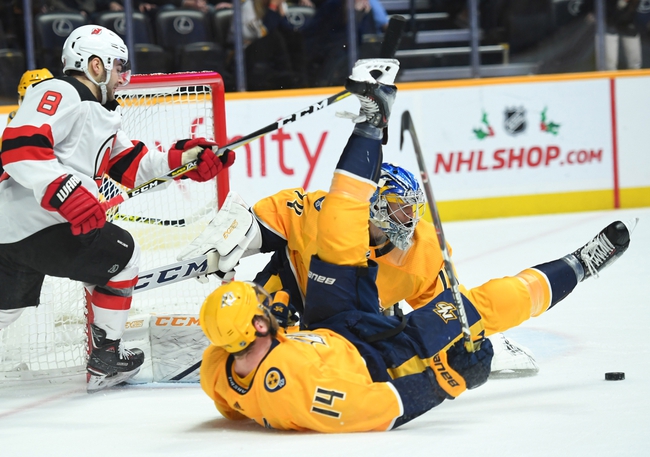 The Nashville Predators travel to Newark, NJ on Thursday for a game against the New Jersey Devils but first must play the Washington Capitals on Wednesday night.  In their last game, the Predators were defeated by the Toronto Maple Leafs by the score of 5-2.  Nashville received goals from Mikael Granlund and Viktor Arvidsson but were never in the game against the Maple Leafs. Pekka Rinne started in net for Nashville and recorded the loss as he allowed 4 goals on 30 Toronto shots on the night.

After their win against the Sabres, the Predators record on the season is 22-19-7, good enough for 7th place in the Central Division. Nashville’s points leader is Roman Josi who has 48 points on the season. Filip Forsberg leads Nashville in goals with 16 on the season, including 4 coming while on the power play.  Roman Josi is also Nashville’s leader in assists with 34 on the year. Goalie Pekka Rinne is 16-11-3 on the season and has recorded 3 shutouts and a goals against average of 2.98.  Meanwhile, backup goalie Juuse Saros has not been as good and is 6-8-4 on the year with a goals against average of 3.13.  Nashville comes into Thursday’s game with 2 players on their injury report as Colton Sissons and Ryan Ellis are both on injured reserve.

The New Jersey Devils welcome the Nashville Predators to town on Thursday, after winning their last game against the Ottawa Senators by the score of 4-3 in a shootout.  New Jersey received goals from Damon Severson, Kevin Rooney and Kyle Palmieri on their way to the win.  Mackenzie Blackwood started in net for the Devils and recorded the win, making saves on 35 of 38 Senators shots in the game.

After the win against Ottawa, the Devils are now 18-24-7 on the season which places them in 8th place in the Metropolitan Division.  Kyle Palmieri leads the Devils in points with 32 on the year.  The Devils leading goal scorer is Blake Coleman who has recorded 19 so far this season. Nikita Gusev leads the Devils in assists on the year with 21.  Goalie Mackenzie Blackwood is 15-12-6 with 1 shutout and a 2.95 goals against average.  Backup goalie Louis Domingue is 3-5-0 with a goals against average of 3.66.  New Jersey enters Thursday’s game with 1 player listed on their injury report as P.K. Subban is listed as day to day.