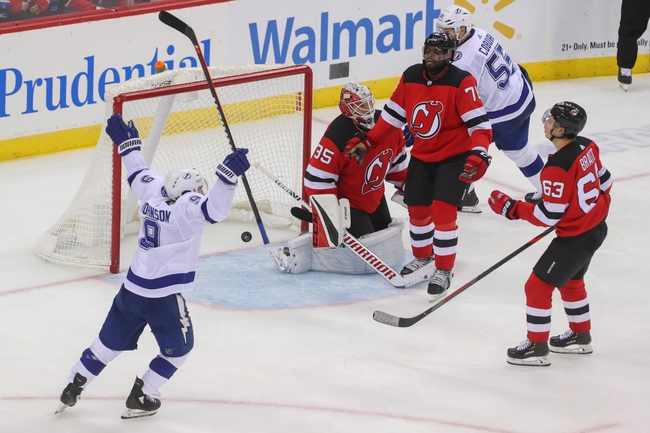 The Tampa Bay Lightning travel to New Jersey on Sunday for a game against the Devils, but first must play the Philadelphia Flyers on Saturday.  In their last game, the Lightning defeated the Arizona Coyotes by the score of 4-0.  Tampa Bay received goals from Alex Killorn, Mikhail Sergachev and 2 goals from Nikita Kucherov on their way to the win.  Andrei Vasilevskiy got the win in net for the Lightning as he made saves on all 25 of Arizona’s shots on the night.

After the win against Arizona, the Lightning are now 26-13-4, good enough for 2nd in the Atlantic Division.  Nikita Kucherov leads Tampa Bay in points with 49 and in assists with 32.  Brayden Point is the leading goal scorer for the Lightning as he has scored 18 goals on the year with 7 coming while on the power play.  Lighting goalie Andrei Vasilevskiy is currently 21-9-2 on the season with 1 shutout and a goals against average of 2.66. Backup goalie Curtis McElhinney is 5-4-2 on the season with a 3.19 goals against average. Tampa Bay comes into the game with 3 players listed on their injury report as Ryan McDonagh is listed as out while Patrick Maroon and Ondrej Palat are listed as day to day.

The New Jersey Devils welcome the Tampa Bay Lightning to town on Sunday, but first they must play the Washington Capitals on Saturday night.  In their last game, the Devils were defeated by the New York Rangers by the score of 6-3.  New Jersey received goals from Kevin Rooney, Blake Coleman and Damon Severson, but it wasn’t enough to pull out the win against New York.  Both of New Jersey’s goalies saw action the game as Mackenzie Blackwood allowed 5 goals on 25 shots, while Louis Domingue allowed 1 goal on 12 shots that he faced against the Rangers.

After the loss against New York, the Devils are now 15-21-7 on the season which places them in 8th place in the Metropolitan Division.  Kyle Palmieri leads the Devils in points with 30 as well as goals with 16 so far on the season. Nikita Gusev leads the Devils in assists on the year with 18.  Goalie Mackenzie Blackwood is 14-12-6 with 1 shutout and a 2.97 goals against average.  Backup goalie Louis Domingue is 1-4-0 with a goals against average of 3.99.  New Jersey enters Sunday’s game with 2 players listed on their injury report as Jack Hughes and Jesper Bratt are both listed as day to day.