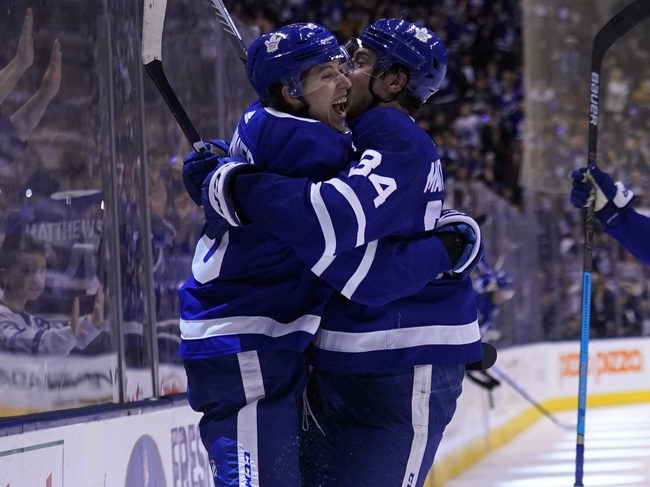 The Toronto Maple Leafs head to Newark, New Jersey on Friday for a game against the Devils in a matchup of teams from the Eastern Conference.  In their last game, the Maple Leafs won a high scoring affair against the Carolina Hurricanes by the score of 8-6.  Toronto received goals from Jason Spezza, William Nylander, John Tavares, Auston Matthews, Tyson Barrie, Pierre Engvall and 2 goals from Mitch Marner on their way to the win.  Maple Leafs goalie Frederick Anderson got the win in net for Toronto as he recorded 34 saves on 40 of the Hurricanes’ shots in the game.

On the season, the Maple Leafs are currently 20-14-4 and are currently in 2nd place in the Atlantic Division.  Austin Matthews leads Toronto in points with 43 and goals with 24. Mitch Marner leads Toronto in assists on the season with 25. Goalie Frederick Anderson is 19-8-3 on the season with 1 shutout and a 2.64 goals against average. Backup goalie Michael Hutchinson is 1-5-1 with a goals against average of 4.06.  Toronto enters Friday’s game with 1 player listed on their injury report as Trevor Moore is listed as day to day.

The New Jersey Devils welcome the Toronto Maple Leafs to town after winning their last game by the score of 7-1 against the Chicago Blackhawks.  New Jersey received goals from Jack Hughes, P.K. Subban, Damon Severson, John Hayden, Travis Zajac, Blake Coleman and Pavel Zacha on their way to the win.  Devils goalie Mackenzie Blackwood recorded the win in net as he made saves on 32 of 33 of Chicago’s shots in the game.

After the win against Chicago, the Devils are now 12-19-5 on the season which places them in 8th place in the Metropolitan Division.  After the recent trade of Taylor Hall, Kyle Palmieri now leads the Devils in points with 23 as well as goals with 14 so far on the season. Nikita Gusev leads the Devils in assists on the year with 15.  Goalie Mackenzie Blackwood is 11-10-4 with 1 shutout and a 2.81 goals against average.  Backup goalie Louis Domingue is 1-4-0 with a goals against average of 4.15.  New Jersey enters Friday’s game with a clean bill of health as they do not have anyone listed on their injury report.