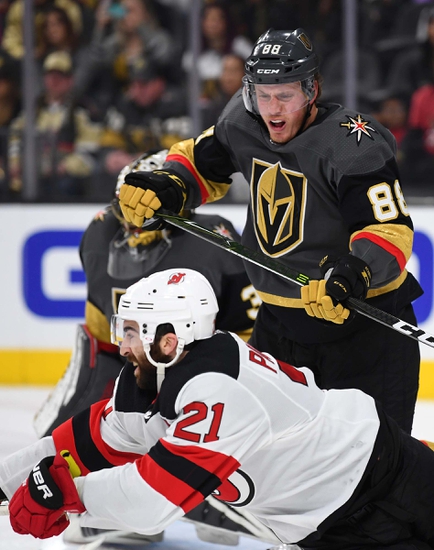 The Vegas Golden Knights head to New Jersey on Tuesday, for a game against the Devils but first must play the New York Rangers on Monday night.  In their last game, Vegas was victorious against the Arizona Coyotes in a shootout by the score of 2-1.  The lone goal for Vegas in regulation was scored by Alex Touch on assists from Nicolas Hague and Jonathan Marchessault.  Vegas beat Arizona in the shootout by the score of 2-1.  Malcolm Subban played well in net for Vegas and picked up the win, recording 35 saves on 36 of Arizona’s shots.

After the win against Arizona, Vegas is now 13-11-4 and are currently in a tie for 4th place in the Pacific Division.  Max Pacioretty leads the Golden Knights in points on the year with 25 and in assists with 16.  Mark Stone leads Vegas in goals with 11 on the season, with 5 goals coming while on the power play. Vegas goalie Marc-Andre Fleury is currently 11-6-2 with 2 shutouts and a goals against aver of 2.54 this season.  Meanwhile, backup goalie Malcolm Subban is 2-4-2 with a goals against average of 3.09. The Knights come into Monday’s game with 2 players listed on their injury report as Marc-Andre Fleury is listed as day to day while Cody Eakin is listed as out.

The New Jersey Devils welcome the Vegas Golden Knights to town on Tuesday, but first must play the Buffalo Sabres on Monday night.  In their last game, the Devils were defeated 4-0 by the New York Rangers.  New Jersey totaled 33 shots in the game but were never able to sneak one by Rangers goalie Alexandar Georgiev.  Devils goalie Mackenzie Blackwood took the loss in net as he allowed 3 goals on 22 of the Rangers shots.

After the loss against New York, the Devils are now 9-12-4 on the season which places them in 8th place in the Metropolitan Division.  Taylor Hall leads the Devils in points with 21 and assists with 17, while Kyle Palmieri leads the team in goals with 9 so far on the season. Goalie Mackenzie Blackwood is 8-7-3 with 1 shutout and a 3.12 goals against average.  Backup goalie Louis Domingue is 1-1-0 with a goals against average of 1.76.  New Jersey enters Monday’s game with just 1 player listed on their injury report as Jack Hughes is listed as out.