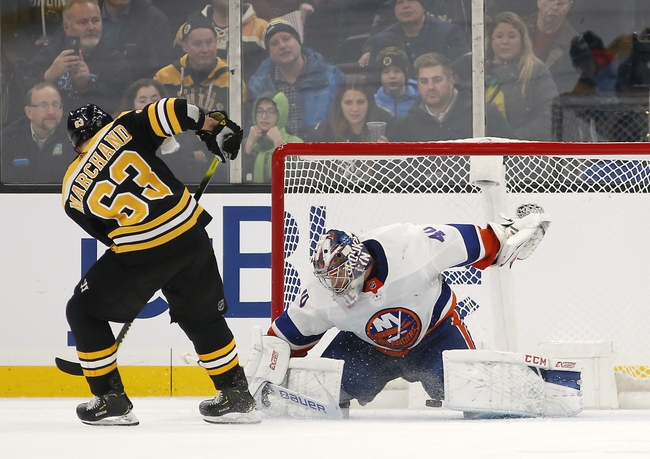 The Boston Bruins head to Brooklyn, NY on Saturday for a game against the Islanders in a matchup of teams from the Eastern Conference.  In their last game, the Bruins defeated the Winnipeg Jets by the score of 5-4.  The Bruins received 3 goals from David Pastrnak and 2 goals from Jake DeBrusk on their way to the win against the Jets. Boston goalie Jaroslav Halak was in net for the Bruins and recorded the win, making saves on 17 of 21 Winnipeg shots on the night.

The Bruins are currently 26-8-11 on the season and are currently in 1st place in the Atlanta Division. David Pastrnak leads the Bruins in points with 65 on the season.  Pastrnak also leads the Bruins in goals on the year as he has recorded 35 on the season.  Brad Marchand is Boston’s leader in assists with 42 on the year.  The goalies for Boston have been strong all season as Tuukka Rask is currently 16-4-6 with 2 shutouts and a goals against average of 2.29.  Backup goalie Jaroslav Halak currently has a record of 10-4-5 with 3 shutouts and a goals against average of 2.34.  The Bruins have 5 players listed on their injury report as Connor Clifton is on injured reserve, Jakub Lauko is out, while Joakim Nordstrom, Torey Krug and Zdeno Chara are all listed as day to day.

The New York Islanders welcome the Boston Bruins to town after winning their last game against the New Jersey Devils by the score of 4-3.  The Islanders received goals from Casey Cizikas, Jordan Eberle, Tom Kuhnhackl and Anders Lee on their way to the win.  Islander goalie Thomas Greiss recorded the win in net for his team as he made saves on 32 of 35 New Jersey shots in the game.

The New York Islanders are 27-12-3 on the season and are currently in 2nd in the Metropolitan Division. The Islanders points, assists and goals leader is Mathew Barzal who has recorded 35 points this season as well as 16 goals and 19 assists.  Goalie Semyon Varlamov is currently 15-5-3 with 2 shutouts to go along with a goals against average of 2.20.  Thomas Greiss is 12-7-0 with a 2.59 goals against average.  The Islanders enter Saturday’s game with the Bruins with 1 player on their injury report as Cal Clutterbuck is on injured reserve.