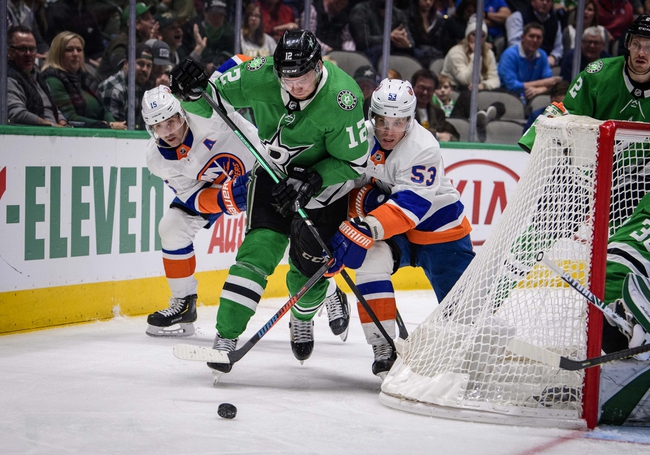 The Dallas Stars travel to Brooklyn, NY on Tuesday for a game against the Islanders, but first must face the New York Rangers on Monday night.  In their last game, the Stars defeated the New Jersey Devils 3-2 in overtime.  Dallas received goals from Jason Dickinson, Joel Kiviranta and the game winning goal in overtime by Joe Pavelski on their way to the victory.  Stars goalie Ben Bishop got the start in net for Dallas and recorded the win, making saves on 29 of the 31 New Jersey shots on the night.

With the win against New Jersey, the Stars are now 29-18-4 on the season which is good enough for Dallas to be in 2nd place in the Central Division. Tyler Seguin leads Dallas in points with 37 and assists with 26 on the year. Alexander Radulov leads the Stars in goals with 15 on the season including 7 on the power play. Goalie Ben Bishop is currently 18-11-3 with 2 shutouts and a goals against average of 2.31.  Backup goalie Anton Khudobin is 11-7-1 with a goals against average of 2.30. The Stars come into Monday’s game with 3 players listed on their injury report as Justin Dowling is on injured reserve, Roope Hintz is out and Andrew Cogliano is day to day.

The New York Islanders welcome the Dallas Stars to town on Tuesday after losing their last game against the Vancouver Canucks by the score of 4-3 in overtime.  The Islanders received goals from Michael Dal Colle, Jordan Eberle and Brock Nelson, but it wasn’t enough to beat the Canucks. Islanders goalie Thomas Greiss recorded the loss net as he allowed 4 goals on 24 Vancouver shots on the night.

The New York Islanders are 29-15-6 on the season and are currently in 4th place in the Metropolitan Division. The Islanders points, assists and goals leader is Mathew Barzal who has recorded 43 points this season as well as 21 goals and 26 assists.  Goalie Semyon Varlamov is currently 15-8-4 with 2 shutouts to go along with a goals against average of 2.59.  Thomas Greiss is 14-7-2 with a 2.50 goals against average.  The Islanders enter Tuesday’s game against the Stars with 1 player listed on their injury report as Cal Clutterbuck is on injured reserve.