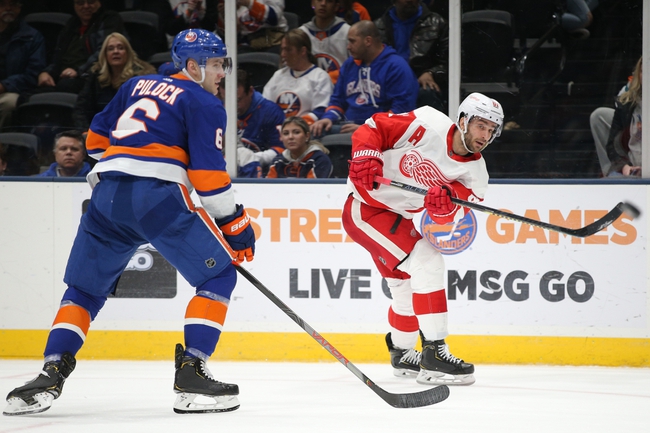 The Detroit Red Wings and the New York Islanders meet in NHL action from the Nassau Coliseum on Friday night.

The Detroit Red Wings will look to build on a 4-3 win over Montreal in their last outing. Montreal jumped out to a 2-0 lead by the end of the opening period before Robby Fabbri got the Red Wings on the board just over a minute into the 2nd period. The Habs would restore the two-goal lead later in the 2nd period. Andreas Athanasiou would pull a goal back just past the five minute mark of the 3rd and Mike Green tied the game just past the midway point of the 3rd. Athanasiou gave Detroit the lead for good with just over five minutes to play as the Red Wings would hold on for the final 5:15 en route to a rare win. Jonathan Bernier got the win to improve to 13-17-2 on the year after stopping 19 of 22 shots faced in the victory.

The New York Islanders will be out to snap a four-game losing streak after a 3-1 loss to the Colorado Avalanche last time out. Colorado took the lead just before the miday point of the 1st before the Avs doubled the lead in the first minute of the 2nd period. Colorado pushed the lead to 3-0 early on in the 3rd, before Brock Nelson pulled a goal back late in the 3rd but despite outshooting the Avs 10-3 in the 3rd, it just ended up being a consolation goal as the Avs would hold on for the win. Semyon Varlamov took the loss, falling to 17-12-4 on the year after stopping 26 of 29 shots faced in the losing effort.

I get why the plus money with Detroit would be tempting as the Wings are coming off of a win and New York slumping lately, losing four straight. However, a quarter of Detroit’s win this season have come against Montreal, and the Red Wings are 11-43-4 against the rest of the league this season. It’s not like New York’s losses are coming to bad teams, as Colorado, Arizona, Vegas and Nashville (all on the road mind you) are teams in or near a playoff position. I think this is a good spot for the Islanders to rebound, so I’ll side with the Islanders on the puck line here.