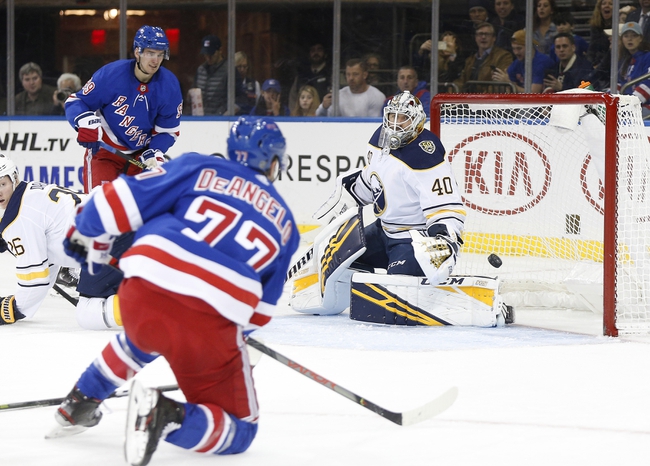 The Buffalo Sabres travel to New York, NY on Friday for a game against the Rangers but first, the Sabres must play the Detroit Red Wings on Thursday night.  In their last game the Sabres were defeated by the Colorado Avalanche by the score of 6-1.  Buffalo received their lone goal in the game from Sam Reinhart at 19:59 of the 1st period with assists from Jake McCabe and Jack Eichel.  Both Buffalo goalies saw action in the game as Carter Hutton allowed 5 goals on 13 shots while Jonas Johansson allowed 1 goal on 14 of the shots that he saw from the Avalanche.

After the loss against the Avalanche, the Sabres are now 23-23-7 on the season, placing them in 6th place in the Atlantic Division.  Offensively the Sabres are led by Jack Eichel, who has recorded team highs in points with 66, goals with 31, and assists with 35. 7 of Eichel’s goals have come while on the power play as well as recording 13 assists while on the man advantage and he is clearly Buffalo’s biggest offensive threat. Buffalo goaltender Carter Hutton is 7-9-4 with 2 shutouts and a goals against average of 3.30.  Jonas Johansson is 0-0-0 on the season with 2.03 goals against average.  Buffalo enters Thursday’s game with 6 players listed on their injury report as Linus Ullmark and Victor Olofsson are on injured reserve while Brandon Montour, Curtis Lazar, Johan Larsson and Rasmus Dahlin are day to day.

The New York Rangers welcome the Buffalo Sabres to town on Friday after winning their last game by the score of 5-3 against the Toronto Maple Leafs.  The Rangers received goals from Pavel Buchnevich, Filip Chytil, Mika Zibanejad, Chris Kreider and Greg McKegg on their way to the win. New York goalie Igor Shesterkin got the start in net for the Rangers and recorded the win in the game as he made saves on 27 of the 30 shots that he faced from the Maple Leafs.