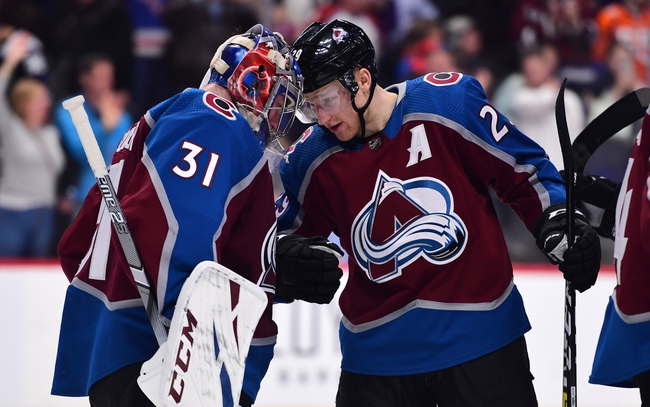 The Colorado Avalanche head to New York, NY on Tuesday for a game against the New York Rangers, but first must play the Islanders on Monday night.  The Avs enter Monday’s game coming off of a win by the score of 5-2 against the New Jersey Devils.  Colorado received goals from Ian Cole and Pierre-Edouard Bellemare to along a long with 3 goals from Mikko Rantanen on their way to the win against the Devils. Colorado goalie Philipp Grubauer got the start in net and recorded the win as he made 28 saves on 30 New Jersey shots on the night.

With the win against New Jersey, Colorado is now 25-13-4 and is in 2nd place in the Central Division.  Nathan MacKinnon leads the Avs in points with 64, in goals with 25 and in assists with 39.  MacKinnon is clearly Colorado’s most dangerous player and is someone that opposing teams must be aware of at all times.  Colorado goalie Pavel Francouz is 11-3-1 with a goals against average of 2.41.  Goalie Philipp Grubauer is 12-9-3 with a goals against average of 2.87. Colorado comes into Monday’s game with 1 player listed on their injury report as Valeri Nichushkin is listed as out.

The New York Rangers welcome the Colorado Avalanche to town after losing their last game by the score of 2-1 against the Vancouver Canucks.  The Rangers received their lone goal in the game from Pavel Buchnevich at 7:59 of the 1st period, with an assist from Chris Kreider. New York goalie Alexandar Geogiev got the start in net for the Rangers and took the loss in the game as he allowed 2 goals on the 27 shots he faced from Vancouver.

With the loss against Vancouver, Edmonton is now 19-18-4 on the season which is good enough for 7th place in the Metropolitan Division.  Offensively the Rangers are led in points by Artemi Panarin in points with 55 and in goals with 22 while 6 have come on the power play.  Panarin also leads the Rangers in assists on the season with 33.  Goalie Alexandar Georgiev is 10-9-1 with 2 shutouts and a goals against average of 3.17 on the season.  The Rangers other goalie is Henrik Lundqvist who has recorded a record of 9-9-3 with a goals against average of 3.10 so far this year.  New York enters Tuesday’s game with 1 player listed on their injury report as Libor Hajek is listed as day to day.