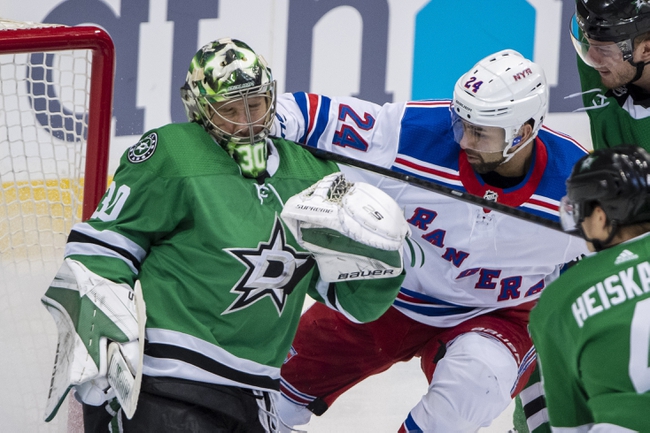 The Dallas Stars travel to New York, NY on Monday for a game against the Rangers in a matchup of teams from the Western and Eastern Conference.  In their last game, the Stars defeated the New Jersey Devils 3-2 in overtime.  Dallas received goals from Jason Dickinson, Joel Kiviranta and the game winning goal in overtime by Joe Pavelski on their way to the victory.  Stars goalie Ben Bishop got the start in net for Dallas and recorded the win, making saves on 29 of the 31 New Jersey shots on the night.

With the win against New Jersey, the Stars are now 29-18-4 on the season which is good enough for Dallas to be in 2nd place in the Central Division. Tyler Seguin leads Dallas in points with 37 and assists with 26 on the year. Alexander Radulov leads the Stars in goals with 15 on the season including 7 on the power play. Goalie Ben Bishop is currently 18-11-3 with 2 shutouts and a goals against average of 2.31.  Backup goalie Anton Khudobin is 11-7-1 with a goals against average of 2.30. The Stars come into Monday’s game with 3 players listed on their injury report as Justin Dowling is on injured reserve, Roope Hintz is out and Andrew Cogliano is day to day.

The New York Rangers welcome the Dallas Stars to town on Monday after winning their last game by the score of 1-0 against the Detroit Red Wings.  The Rangers received their lone goal in the game from Mika Zibanejad on the power play at 12:13 of the 1st period with assists from Chris Kreider and Ryan Strome. New York goalie Henrik Lundqvist got the start in net for the Rangers and recorded the win in the game as he made saves on all 33 shots he faced from the Red Wings, recording his first shutout of the season.

With the win against the Red Wings, the Rangers are now 25-21-4 on the season which is good enough for 7th place in the Metropolitan Division.  Offensively the Rangers are led by Artemi Panarin in points with 70 and in goals with 27 while 6 have come on the power play.  Panarin also leads the Rangers in assists on the season with 43.  Rangers goalie Henrik Lundqvist is 10-10-3 with 1 shutout and a goals against average of 3.05.  Goalie Alexandar Georgiev is 12-10-1 with 2 shutouts and a goals against average of 3.11 on the season.  New York enters Monday’s game with 1 player listed on their injury report as Chris Kreider is day to day.