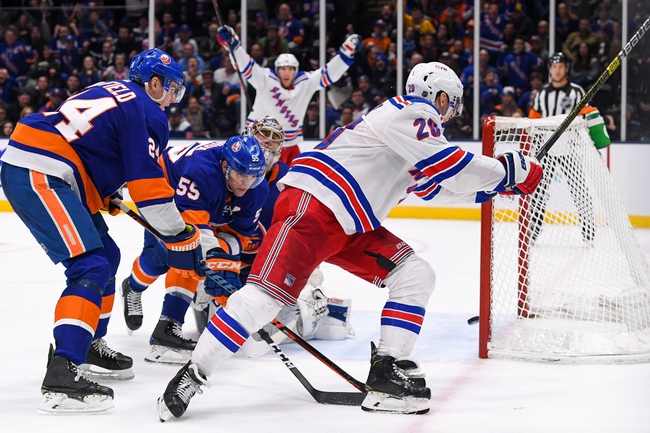 The New York Islanders make the short trip to The Big Apple on Tuesday for a game against the New York Rangers in a game between two teams in the Metropolitan Division.  In their last game, the Islanders were defeated by the Carolina Hurricanes by the score of 2-1 in a shootout.  The Islanders received their lone goal in the game from Anders Lee at 19:04 of the 2nd period with an assist from Scott Mayfield.  Islanders goalie Thomas Greiss took the loss in net for his team as he allowed 1 goal on 32 Carolina shots in the game before losing in the shootout.

The New York Islanders are 28-15-5 on the season and are currently in 3rd in the Metropolitan Division. The Islanders points, assists and goals leader is Mathew Barzal who has recorded 40 points this season as well as 19 goals and 23 assists.  Goalie Semyon Varlamov is currently 15-8-4 with 2 shutouts to go along with a goals against average of 2.59.  Thomas Greiss is 13-7-1 with a 2.45 goals against average.  The Islanders enter Tuesday’s game against the Rangers with 2 players listed on their injury report as Jordan Eberle and Josh Bailey are listed as day to day.

The New York Rangers welcome the New York Islanders to town after losing their last game by the score of 2-1 against the Columbus Blue Jackets.  The Rangers received their lone goal in the game from Brady Skjei at 18:23 of the 1st period with an assist from Jacob Trouba. New York goalie Igor Shesterkin got the start in net for the Rangers and took the loss in the game as he allowed 2 goals on the 31 shots he faced from Columbus.

With the loss against Columbus, the Rangers are now 23-20-4 on the season which is good enough for 7th place in the Metropolitan Division.  Offensively the Rangers are led in points by Artemi Panarin in points with 68 and in goals with 26 while 6 have come on the power play.  Panarin also leads the Rangers in assists on the season with 42.  Goalie Alexandar Georgiev is 12-9-1 with 2 shutouts and a goals against average of 3.06 on the season.  The Rangers other goalie is Igor Shesterkin who has recorded a record of 2-1-0 with a goals against average of 2.68 so far this year.  New York enters Tuesday’s game with 2 players listed on their injury report as Pavel Buchnevich is listed as day to day while Brendan Lemieux is on injured reserve.