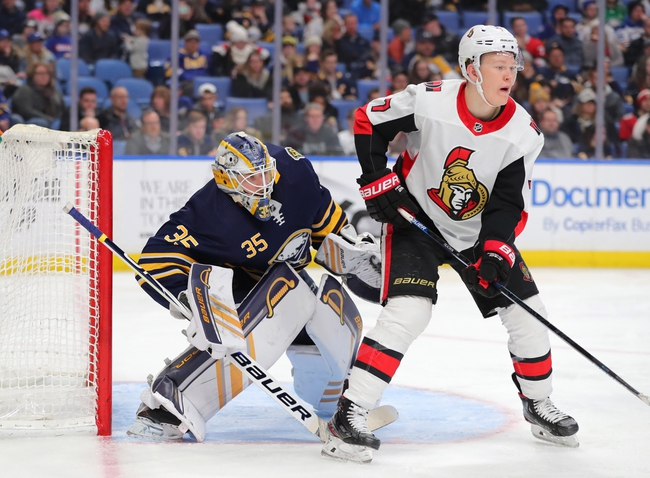 The Buffalo Sabres and the Ottawa Senators meet in NHL action from the Canadian Tire Centre on Tuesday night.

The Buffalo Sabres will look to add to their current three-game winning streak after a 5-2 win over Toronto in their last outing. The game was scoreless through the opening 20 minutes before Johan Larsson opened the scoring 1:32 into the 2nd period. Conor Sheary doubled the lead just before the midway point of the middle period. Toronto pulled one back just 1:47 later and tied the game at two just over two minutes into the 3rd before Jack Eichel, Kyle Okposo and Jimmy Vesey all scored in a span of 1:31 to blow the game wide open at 5-2, a lead that the Sabres would ride all the way to the finish for a big win over their cross-border rival. Carter Hutton got the win to improve to 11-9-4 on the year after stopping 20 of 22 shots faced in the winning effort.

The Ottawa Senators will look to build on a 4-3 overtime win over Dallas last time out. Dallas opened the scoring just over three minutes into the game before Jean-Gabriel Pageau tied the game at one just 4:33 later and Brady Tkachuk gave Ottawa the lead with just under two minutes to go in the opening period. Dallas tied the game at two just :33 after that, and the tie would hold up through the 2nd and the first half of the 3rd period. Tyler Ennis gave Ottawa the lead just before the midway point of the 3rd period, but Dallas would tie the game at three with just over five minutes to go in regulation. The game ended up going to OT where Artem Anisimov gave Ottawa the overtime winner with just over a minute to play in the extra frame. Craig Anderson got the win, improving to 8-13-2 on the year after stopping 36 of 39 shots faced in the winning effort.

I think it’s safe to safe I haven’t been high on either of these teams for some time now, but the fact of the matter is, someone has to win this game, and side-by-side, the Sabres are playing much better hockey right now and did take it to Toronto last time out. Ottawa is just providing no value regardless of where they’re playing, and I just think that the Senators are on auto-fade until further notice. I’ll lay the juice with Buffalo here by default.