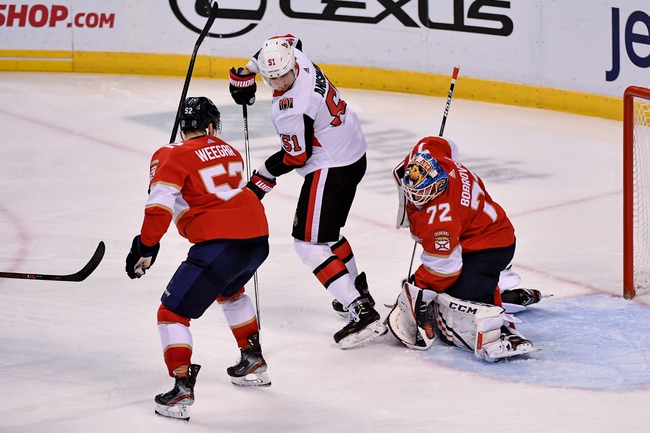 The Florida Panthers head to Ottawa, Ontario on Thursday for a game against the Senators in a matchup of teams from the Eastern Conference.  In their last game, Florida was defeated by the score of 4-1 against the Columbus Blue Jackets.  The Panthers received their lone goal at 3:39 of the second period from Colton Sceviour with assists from Anton Stralman and Mark Pysyk.  Panthers goalie Sergei Bobrovsky took the loss in net for the Panthers as he allowed 4 goals on 28 Columbus shots in the game.

The Panthers are now 20-14-5 on the season which puts them in 4th place in the Atlantic Division. Jonathan Huberdeau leads Florida in points with 53 and in assists with 37 on the season.  Huberdeau also leads Florida in goals as he has recorded 16 so far this year with 3 coming while on the power play.  Panthers goalie Sergei Bobrovsky is 14-11-4 with 1 shutout and a 3.29 goals against average.  Florida’s backup goalie, Chris Driedger is 3-1-0 with 1 shutout and a goals against average of 2.27. Florida enters Thursday’s game with 1 player listed on their injury report as Mackenzie Weegar is listed as out.

The Ottawa Senators welcome the Florida Panthers to town on Thursday looking for a win against a fellow Eastern Conference team.  In their last game the Senators were defeated by the Pittsburgh Penguins by the score of 5-2.  The Senators received both of their goals from Nick Paul in the second period in the loss.  Goalie Marcus Hogberg started in net for Ottawa and recorded the loss for the Senators as he allowed 5 goals on 33 Pittsburgh shots on the night.

With the loss against Pittsburgh, Ottawa is 16-19-5, for a total of 37 points which puts them in 7th place in the Atlantic Division.  Ottawa has been led in points and goals by Anthony Duclair, who has 31 points and 21 goals on the season. Thomas Chabot leads the Senators in assists with 20, with 7 coming while on the power play.  Goalie Marcus Hogberg has a record of 1-2-2 and currently has a goals against average of 3.43.  Craig Anderson has a record of 6-8-1 with a goals against average of 2.94.  Ottawa comes into Thursday’s game with 1 player listed on their injury report as Ron Hainsey is listed as day to day.