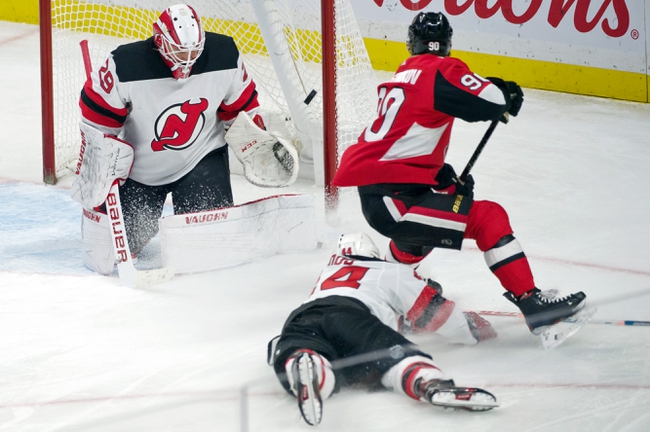 The New Jersey Devils travel to Ottawa, Ontario on Monday for a game against the Senators in a matchup of teams from the Eastern Conference.  In their last game, the Devils were defeated by the Columbus Blue Jackets by the score of 5-0.  New Jersey was able to put 41 shots on net against the Blue Jackets but were never able to get one past goalie Elvis Merzlikins.  Both Devils’ goalies saw action in the game as Cory Schneider allowed 4 goals on 17 shots before being relived by Mackenzie Blackwood who allowed 1 goal on the 14 shots that he faced.

After the loss against the Blue Jackets, the Devils are now 17-24-7 on the season which places them in 8th place in the Metropolitan Division.  Kyle Palmieri leads the Devils in points with 31 so far this season.  The Devils goal leader in Blake Coleman who has scored 19 so far this year.  Nikita Gusev leads the Devils in assists on the year with 20.  Goalie Mackenzie Blackwood is 14-12-6 with 1 shutout and a 2.96 goals against average.  Backup goalie Louis Domingue is 3-5-0 with a goals against average of 3.66.  New Jersey enters Monday’s game with a clean bill of health as they do not have anyone listed on their injury report.

The Ottawa Senators welcome the New Jersey Devils to town on Monday after winning their last game against the Calgary Flames by the score of 5-2.  The Senators received goals from Brady Tkachuk, Chris Tierney, Connor Brown, Colin White and Vladislav Namestnikov on their way to the win.  Senators goalie Marcus Hogberg started in net for his team and recorded the win, making saves on 40 of the 42 Calgary shots that he faced in the game.

With the win against Calgary, Ottawa is 17-23-8, for a total of 42 points which puts them in 7th place in the Atlantic Division.  Ottawa has been led in points and goals by Anthony Duclair, who has 33 points and 21 goals on the season. Thomas Chabot leads the Senators in assists with 23, with 8 coming while on the power play.  Goalie Marcus Hogberg has a record of 2-2-2 and currently has a goals against average of 2.91.  Craig Anderson has a record of 6-12-1 with a goals against average of 3.32.  Ottawa comes into Monday’s game with no injured listed on their injury report.