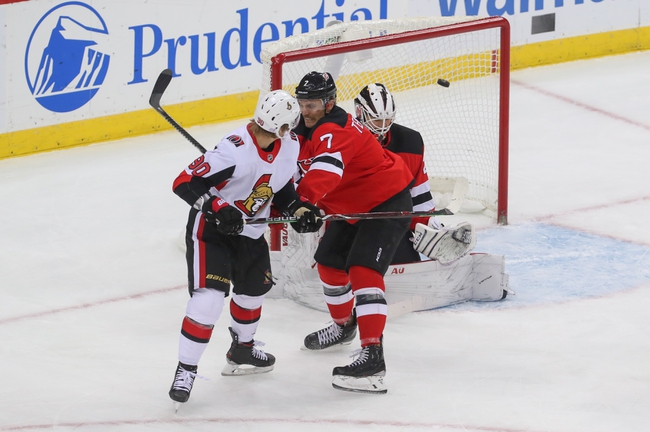 The New Jersey Devils head to Ottawa on Sunday for a game against the Senators in a matchup of two teams from the Eastern Conference.  In their last game, the Devils were defeated by the Toronto Maple Leafs by the score of 5-4 in overtime.  New Jersey received goals from Nico Hischier, Nikita Gusev, Kyle Palmieri and Jesper Bratt, but it wasn’t enough to pull out the win against Toronto.  Devils goalie Mackenzie Blackwood took the loss in net as he allowed 5 goals on 37 Toronto shots in the game.

After the loss against Toronto, the Devils are now 12-19-6 on the season which places them in 8th place in the Metropolitan Division.  After the recent trade of Taylor Hall, Kyle Palmieri now leads the Devils in points with 26 as well as goals with 15 so far on the season. Nikita Gusev leads the Devils in assists on the year with 15.  Goalie Mackenzie Blackwood is 11-10-5 with 1 shutout and a 2.89 goals against average.  Backup goalie Louis Domingue is 1-4-0 with a goals against average of 4.15.  New Jersey enters Sunday’s game with 2 players listed on their injury report as Pavel Zacha is listed as out while Will Butcher is listed as day to day.

The Ottawa Senators welcome the New Jersey Devils to town on Sunday looking for a win against a fellow Eastern Conference team.  In their last game the Senators defeated the Buffalo Sabres by the score of 3-1.  The Senators received goals from Brady Tkachuk and Jean-Gabriel Pageau scored twice on the way to the win.  Goalie Craig Anderson started in net for Ottawa and recorded the win for the Senators as he made saves on 43 of 44 Buffalo shots on the night.

With the win against Buffalo, Ottawa is 16-18-4, for a total of 36 points which puts them in 7th place in the Atlantic Division.  Ottawa has been led in points and goals by Anthony Duclair, who has 30 points and 21 goals on the season. Thomas Chabot leads the Senators in assists with 19, with 7 coming while on the power play.  Goalie Anders Nilsson has a record of 9-9-2 and currently has a goals against average of 3.18.  Craig Anderson has a record of 6-8-0 with a goals against average of 2.88.  Ottawa comes into Sunday’s game with 1 player listed on their injury report as Ron Hainsey is listed as day to day.

The New Jersey Devils have averaged 2.54 goals per game this season while allowing 3.49 goals per game this season.  The Ottawa Senators have scored an average of 2.79 goals per game on the year while allowing 3.18 goals per game.  Both teams are 2-3 in their last 5 games.  The Senators won the first matchup of between these two teams this season by the score of 4-2 in a game played in New Jersey.  I am going to go with Ottawa in this one as they have been better at both ends of the ice this season and in terms of wins and losses.  Also, Ottawa is 6-2-2 in their last 10 games against New Jersey.  I would also look for this game to be a high scoring game as the total has gone over in 4 of the last 6 games between the two teams.  Ottawa wins this one 4-3.