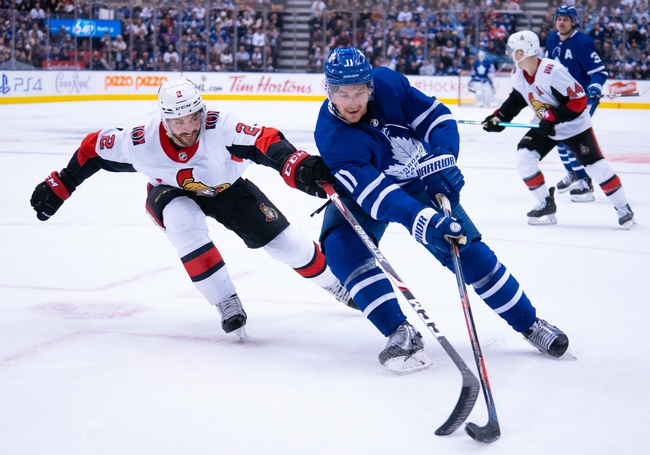 The Toronto Maple Leafs and the Ottawa Senators meet in another installment of the Battle of Ontario from the Canadien Tire Centre on Saturday night.

The Toronto Maple Leafs will look to rebound from a 3-2 loss to the Dallas Stars last time out. Dallas opened the scoring just over a minute into the opening period before doubling their lead :24 into the 2nd period. Auston Matthews pulled a goal back just after the midway point of the 2nd period but Dallas would restore the two-goal cushion early on in the 3rd period. Zach Hyman pulled a goal back for Toronto late in the 3rd, but it was too little too late as Dallas held on for the last 1:19 and picked up the win. Frederik Andersen got the loss, falling to 24-10-6 on the year after allowing 3 goals on 19 shots faced in the losing effort.

The Ottawa Senators will look to build on a 3-2 win over Arizona in their last outing. Vladislav Namestnikov and Brady Tkachuk score 3:51 apart to stake the Sens an early 2-0 lead less than seven minutes into the game before Arizona pulled a goal back with just over three minutes to go in the 2nd period. Nick Paul would restore Ottawa’s two goal lead just under seven minutes into the 3rd period but Arizona wouldn’t go away, bringing the deficit back to 3-2 just 2:11 later. Both sides traded chances in the 3rd, but ultimately Ottawa had done enough and held on to the 3-2 lead to the final horn to pick up the win. Marcus Hogberg got the win to improve to 3-5-7 on the year after stopping 32 of 34 shots faced in the winning effort.

I’ve gone back and forth on this game, and it’s not as cut and dry as the line would suggest as Ottawa tends to get up for these rivalry games. However, Toronto is still the better team and despite not getting the win last time out, you can almost see a bit more comfort with the lineup knowing that there’s a reliable goaltender in the crease on any given night with the acquisition of Jack Campbell. Toronto is far from safe in a playoff position right now, and I think the LEafs need to take advantage of winnable spots like these whenever they come up, so I’ll take Toronto and to get the price down, I’ll side with the Leafs in regulation.