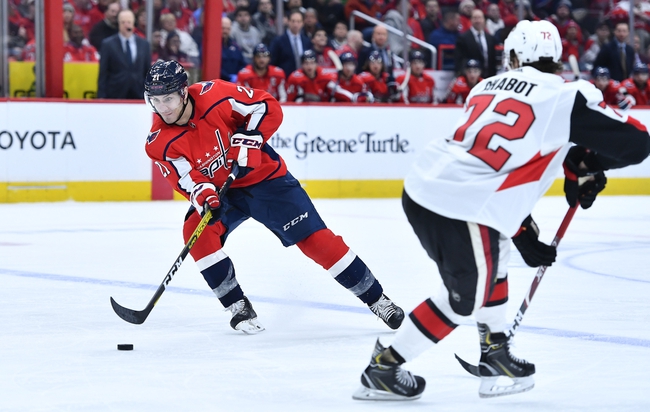 The Washington Capitals travel to Ottawa, Ontario on Friday for a game against the Senators in a matchup of teams from the Eastern Conference.  In their last game, Washington was defeated by the Nashville Predators by the score of 5-4.  The Capitals received 2 goals from Richard Panik to go along with goals from Alex Ovechkin and Tom Wilson but were unable to pull out a victory.  Braden Holtby took the loss in net for the Capitals as he allowed 5 goals on 24 shots that he faced from the Predators.

With the loss against the Predators, the Capitals are now 34-12-5 on the season, good enough for 1st place in the Metropolitan Division.  Washington is led in points by John Carlson who has recorded 60 points on the season.  Carlson is also Washington’s leader in assists on the year as he has recorded 47 so far this season.  Alex Ovechkin leads the Capitals in goals on the season with 35, with 11 coming while on the power play.  Goalie Braden Holtby is currently 19-10-4 on the season with a goals against average of 3.11. Backup goalie Ilya Samsonov has recorded a record of 15-2-1 on the year in net with 1 shutout and a goals against average of 2.06. Washington comes into Friday’s game with a clean bill of health as they do not have anyone listed on their injury report.

The Ottawa Senators welcome the Washington Capitals to town on Friday after winning their last game by the score of 5-2 against the Buffalo Sabres. The Senators received goals from Jean-Gabriel Pageau, Tyler Ennis, Mike Reilly, Mark Borowiecki and Nikita Zaitsev on their way to the win. Senators goalie Craig Anderson recorded the win in net as he made saves on 28 of 30 Ottawa shots in the game.

With the win against Buffalo, Ottawa is 18-23-9, for a total of 45 points which puts them in 7th place in the Atlantic Division.  Ottawa has been led in points and goals by Anthony Duclair, who has 33 points and 21 goals on the season. Thomas Chabot leads the Senators in assists with 24, with 9 coming while on the power play.  Goalie Marcus Hogberg has a record of 2-2-6 and currently has a goals against average of 2.90.  Craig Anderson has a record of 7-12-1 with a goals against average of 3.25.  Ottawa comes into Friday’s game 1 players listed on their injury report as Anders Nilsson is on injured reserve.