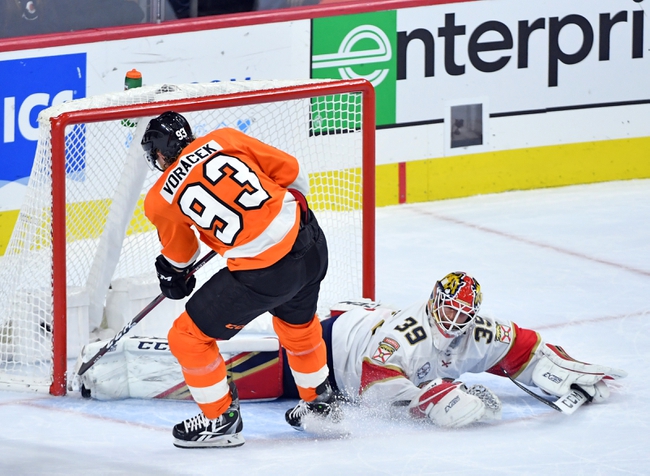 The Florida Panthers travel to Philadelphia, PA on Monday for a game against the Flyers in a matchup of teams from the Eastern Conference.  In their last game, Florida was defeated by the Pittsburgh Penguins by the score of 3-2.  The Panthers received goals from Mike Hoffman and Brett Connolly, but it wasn’t enough to pull out a win.  Panthers goalie Sergei Bobrovsky started in net and recorded the loss, allowing 3 goals on 22 of Pittsburgh’s shots in the game.

The Panthers are now 29-19-6 on the season which puts them in 4th place in the Atlantic Division. Jonathan Huberdeau leads Florida in points with 68 and in assists with 49 on the season.  Evgenii Dadonov leads Florida in goals as he has recorded 23 so far this year with 10 coming while on the power play.  Panthers goalie Sergei Bobrovsky is 20-15-5 with 1 shutout and a 3.27 goals against average.  Florida’s other goalie, Sam Montembeault is 4-2-1, with and a goals against average of 3.40. Florida enters Monday’s game with 4 players listed on their injury report as Chris Driedger is on injured reserve, Brian Boyle is out while Aleksander Barkov and Mackenzie Weegar are day to day.

The Philadelphia Flyers welcome the Florida Panthers to town on Monday after winning their last game to the Washington Capitals by the score of 7-2.  The Flyers received 2 goals from Sean Couturier to go along with goals from Michael Raffl, James van Riemsdyk, Nicolas Aube-Kubel, Travis Konecny and Claude Giroux on their way to the win.   Flyers goalie Brian Elliot recorded the win making saves on 25 of 27 Washington shots in the game.

After the win against the Capitals, the Flyers are now 30-18-7 which is good enough for 6th in the Metropolitan Division.  Sean Couturier leads the Flyers in points with 49 and in assists with 34 so far this season.  Travis Konecny leads Philadelphia in goals with 18 on the year, including 3 coming while on the power play.  Goalie Brian Elliot is 14-6-4 on the year with 2 shutouts and a goals against average of 2.86.  The Flyers other goalie is Carter Hart who is 15-11-3 with 1 shutout and a goals against average of 2.61.  The Flyers come into their game against Florida with 3 players listed on their injury report as Carter Hart and Joel Farabee are out with Shayne Gostisbehere is day to day.