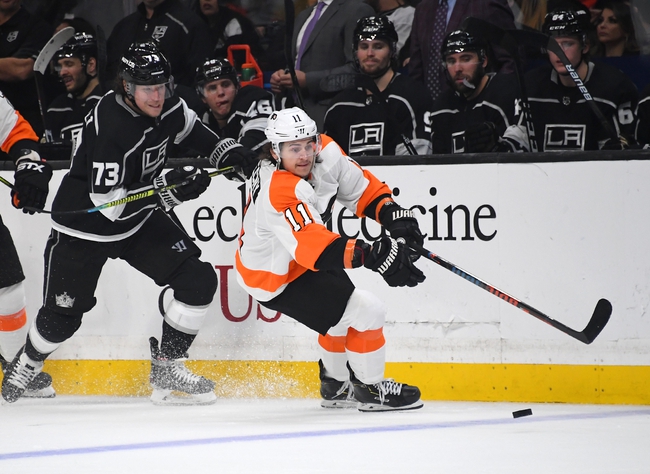 The Los Angeles Kings head to Philadelphia, PA on Saturday for a game against the Flyers.  In their last game, Los Angeles was defeated by the Florida Panthers by the score of 4-3.  The Kings received goals from Alex Iafallo, Jeff Carter and Anze Kopitar but came up just short against the Panthers.  Jack Campbell took the loss in net for the Kings as he allowed 4 goals on 26 of the Panthers’ shots on the night.

The Philadelphia Flyers welcome the Los Angles Kings to town on Saturday after losing their last game to the Montreal Canadiens by the score of 4-1.  The Flyers received their lone goal in the game from Joel Farabee who scored at 18:47 of the 1st period with assists from Tyler Pitlick and Connor Bunnaman.  Flyers goalie Alex Lyon took the loss in the game, allowing 4 goals on 40 Montreal shots in the game.

After the loss against the Canadiens, the Flyers are now 25-17-6 which is good enough for 4th in the Metropolitan Division.  Sean Couturier leads the Flyers in points with 41 and in assists with 28 so far this season.  Travis Konecny leads Philadelphia in goals with 15 on the year, including 3 coming while on the power play.  Goalie Brian Elliot is 10-5-3 on the year with a goals against average of 3.14.  Backup goalie Alex Lyon is 0-1-0 with a goals against average of 4.00.  The Flyers come into their game against Los Angeles with 4 players listed on their injury report as Chris Stewart and Justin Braun are listed as day to day while Carter Hart is out and Nolan Patrick is on injured reserve.