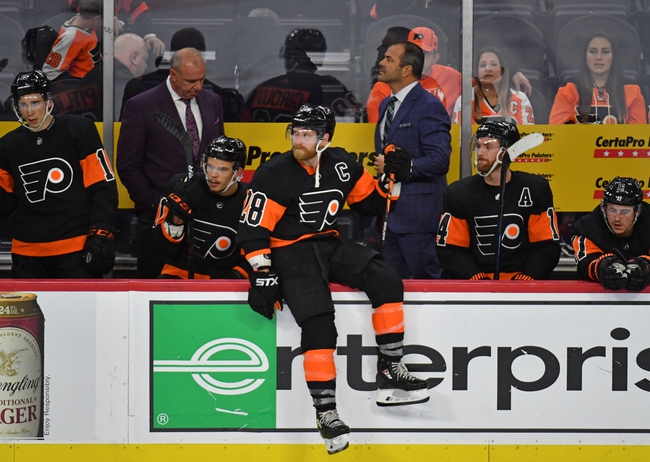 The Vegas Golden Knights come into Philadelphia, PA Monday for a matchup with the Philadelphia Flyers riding a two game win streak that has seen them push their record to 6-3-0 on the young season. In their last game Vegas received a strong goaltending performance from Marc-Andre Fleury who made saves on all twenty nine shots he faced to shut out his former team, the Pittsburgh Penguins and give Vegas the 3-0 victory. The Golden Knights were strong offensively as well, receiving goals from Paul Stastny, William Karlsson and Mark Stone.

While Vegas has won their last two games, they have also won four of their last five and seem to be getting hotter as the season goes on. Marc-Andre Fleury now has a record of 6-2-0 with one shutout, a goals against average of 2.18 and a save percentage of .934 and has been the true backbone of his team. The Vegas offense is lead by Mark Stone who leads the team in points with twelve and goals with six, three of them coming on the power play. Max Pacioretty has also been productive, leading the team in assists with eight.

Whiles Vegas comes into Monday’s matchup looking strong, the same cannot be said about the Philadelphia Flyers who have lost four straight and have a record of 2-3-1. Starting goaltender Carter Hart only made twelve saves on sixteen shots in his last start against the Dallas Stars in a game the Flyers lost 4-1. Philadelphia’s only goal against the Stars came from Sean Couturier which was his second on the season with assists from Travis Konecny and Claude Giroux.

Goalie Carter Hart has the Flyers only two wins while in goal this season and has a goals against average of 2.59 and a save percentage of .890. Back up goalie Brian Elliot was also unsuccessful in his only start of the season after losing his only start of the year to the Calgary Flames in a 3-1 defeat. When the Philadelphia offense does produce, it is lead by Travis Konecny who leads the team in points with eight coming from three goals and five assists.

My pick – While Vegas seems to be hitting their stride, it seems like Philadelphia is caught in a bit of a limbo. On the nights the Flyers offense does produce, the goaltending doesn’t and on nights the goaltending does, the offense doesn’t. The Flyers come into Monday’s game scoring 2.50 goals per game while giving up and an average of 3.00 goals against. Vegas on the other hand, is clearly the better team scoring 3.44 goals per game and only giving up 2.33 per game. Final score prediction, Vegas wins on the under 4-1.