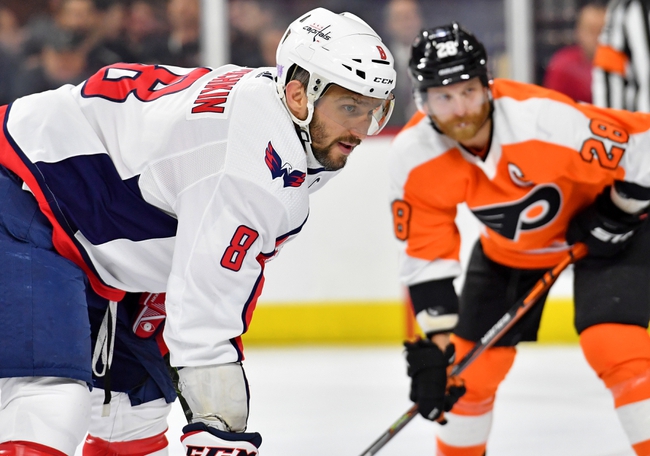 The Washington Capitals head to Philadelphia, PA on Wednesday to face the Flyers in a matchup of two teams from the Metropolitan Division. In their last game, the Capitals defeated the San Jose Sharks by the score of 5-4 in overtime.  The Capitals received goals from Nic Dowd, T.J. Oshie, Lars Eller and 2 goals from Jakub Vrana on their way to the win.  Braden Holtby recorded the win in net for the Capitals as he made saves on 25 of the 28 Sharks shots on the night.

With the win against the Sharks, the Capitals are now 29-9-5 on the season, good enough for 1st place in the Metropolitan Division.  Washington is led in points by John Carlson who has recorded 52 points on the season.  Carlson is also Washington’s leader in assists on the year as he has recorded 39 so far this season.  Alex Ovechkin leads the Capitals in goals on the season with 24, with 9 coming while on the power play.  Goalie Braden Holtby is currently 18-7-4 on the season with a goals against average of 2.99. Backup goalie Ilya Samsonov has recorded a record of 11-2-1 on the year in net with a goals against average of 2.33. Washington comes into Wednesday’s game with 2 players listed on their injury report as Evgeny Kuznetsov and Christian Djoos are both listed as day to day.

The Philadelphia Flyers welcome the Washington Capitals to town on Wednesday after losing their last game to the Arizona Coyotes by the score of 6-2.  The Flyers received goals from Tyler Pitlick and Justin Braun, but they were never truly in the game as they were dominated by the Coyotes.  Both Flyers goalies saw action in the game as Carter Hart allowed 3 goals on 12 shots and Brian Elliot allowed 2 goals on 9 shots in the loss.

After the loss against the Coyotes, the Flyers are now 22-15-5 which is good enough for 5th in the Metropolitan Division.  Travis Konecny leads the Flyers in points with 36 so far this season.  Claude Giroux leads Philadelphia in goals with 13 on the year, including 4 coming while on the power play.  Jakub Voracek leads the Flyers in assists this season with 25 on the year.  Goalie Carter Hart is 13-10-3 with 1 shutout and a goals against average of 2.61.  Backup goalie Brian Elliot is 9-5-2 on the year with a goals against average of 3.05.  The Flyers come into their game against Washington with 1 player listed on their injury report as Justin Braun is listed as out.