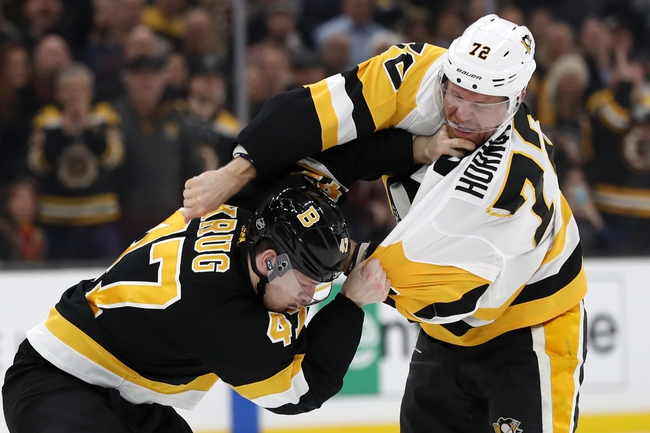 The Boston Bruins head to Pittsburgh, PA on Sunday for a game against the Penguins in a matchup of teams from the Eastern Conference.  In their last game, the Bruins defeated the Pittsburgh Penguins by the score of 4-1.  The Bruins received goals from Patrice Bergeron, Sean Kuraly, Par Lindholm and Brad Marchand. Boston goalie Jaroslav Halak was in net for the Bruins and recorded the win, making saves on 29 of 30 Pittsburgh shots on the night.

The Bruins are currently 28-9-12 on the season and are currently in 1st place in the Atlanta Division. David Pastrnak leads the Bruins in points with 68 on the season.  Pastrnak also leads the Bruins in goals on the year as he has recorded 36 on the season.  Brad Marchand is Boston’s leader in assists with 43 on the year.  The goalies for Boston have been strong all season as Tuukka Rask is currently 17-4-6 with 2 shutouts and a goals against average of 2.27.  Backup goalie Jaroslav Halak currently has a record of 11-5 -6 with 3 shutouts and a goals against average of 2.42.  The Bruins have 3 players listed on their injury report as Tuukka Rask is on injured reserve, Jakub Lauko is out, while David Krejci is listed as day to day.

The Pittsburgh Penguins welcome the Boston Bruins to town on Sunday after winning their last game against the Detroit Red Wings by the score of 2-1 in overtime.  Pittsburgh received goals from Bryan Rust and Sidney Crosby on their way to the win.  Pittsburgh goalie Matt Murray recorded the win in net, making saves on 28 of 29 Detroit shots on the night.

On the year, the Penguins are 30-13-5 and are currently in 2nd place in the Metropolitan Division. Evgeni Malkin leads the Penguins in points and assists on the year with 49 points and 34 assists.  Jake Guentzel leads Pittsburgh in goals with 20.  Pittsburgh has received strong goaltending on the season from both Matt Murray and back up, Tristian Jarry.  On the year, Murray is 14-6-4 with 1 shutout and a 2.84 goals against average, while Jarry is 16-7-1 with 3 shutouts and a 2.16 goals against average. The Penguins enter Sunday’s game with 2 players listed on their injury report as Jake Guentzel and Brian Dumoulin are on injured reserve.